Nowadays there are more and more organizations searching for fault-tolerant and highly available solutions for various parts of their infrastructure, including search, which evolved from merely a “nice to have” feature to the first class citizen and a “must have” element.

The first thing that you need to think about when migrating from old master-slave environment is the hardware. You may wonder why the hardware should be different from what you have right now. There are a few reasons:

Keep all of the above in mind when choosing your final hardware. If you don’t, you’ll run into situations where you will need to adjust your provisioned machines in the near future, and that requires the thing we tend to have the least of – time.

Setting up SolrCloud is a bit different than setting up Solr master-slave architecture. First of all, you will need a working Apache ZooKeeper (http://zookeeper.apache.org/) ensemble. SolrCloud uses ZooKeeper to store collections configuration, collections state, to keep track of nodes, for leader election, and so on. In general ZooKeeper is critical for SolrCloud – it’s like a heart of a SolrCloud cluster. When Zookeeper is not available no indexing operation will be successful, some queries may be – up to a point, where something happens to the cluster. 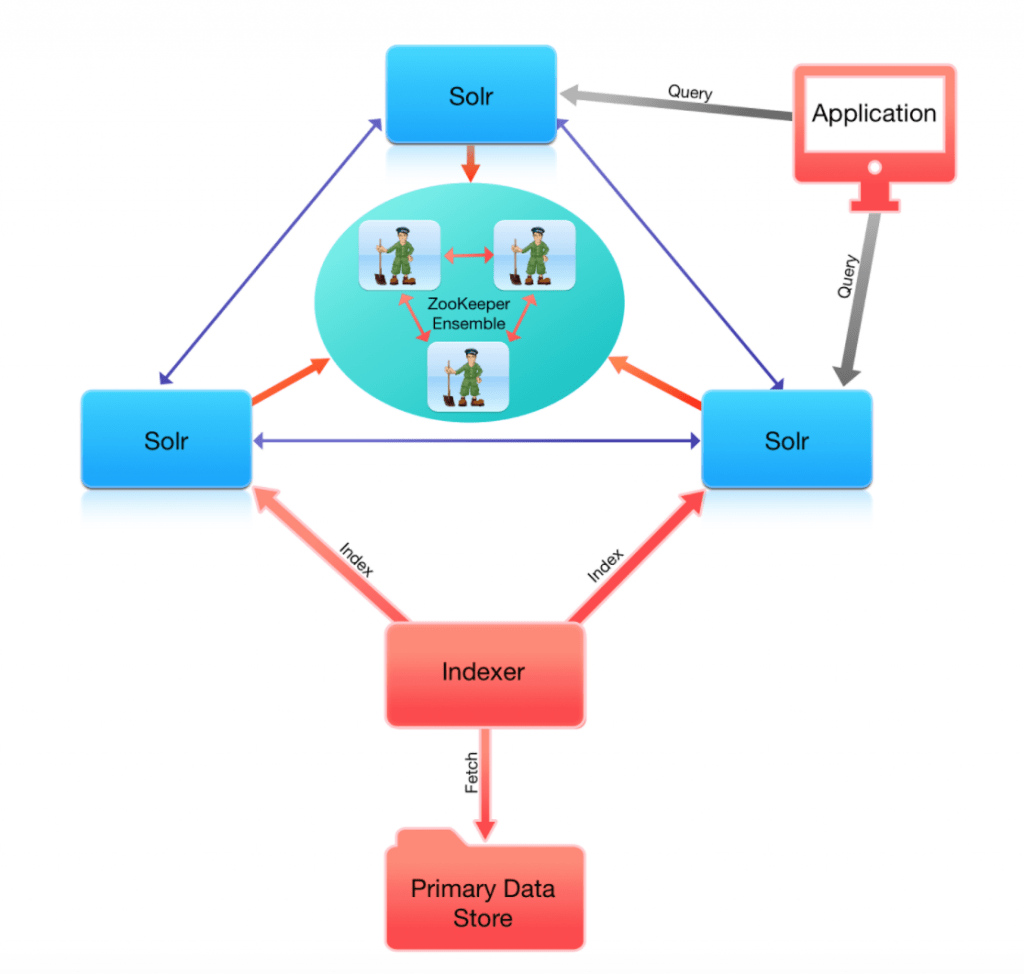 It is also a very good idea to point all SolrCloud instances to all  ZooKeeper nodes, not just one of them.. That will mean that the ZK_HOST property in your solr.in.sh will look something like this:

Of course, you may wonder why we need a standalone ZooKeeper instance when SolrCloud provides embedded ZooKeeper version when run with -c switch without ZK_HOST specified (or without -z switch). At the time of this writing the embedded ZooKeeper has not been designed for production deployments in mind. One of the reasons is that it can’t be used in a distributed mode and having a single Zookeeper instance running inside the same JVM as SolrCloud node is asking for trouble. Imagine JVM going out of memory or SolrCloud node being restarted – the embedded ZooKeeper would go down as well, which means that the cluster would loose its heart for some time. This is something we want to avoid.

The next step in your migration from Solr master-slave to SolrCloud will be preparation of the configuration files. There are at least two files – the schema.xml and solrconfig.xml that you need to take care of.

Note that there can also be additional files that might be required or may need to be removed, depending on the configuration changes. We think that removing all the unneeded configuration files is a good idea because that avoids confusion in the future.

One big thing to remember – if you are migrating to Solr 6 or Solr 7, Java 8 is a must. Since support for Java 7 has ended, you should use a later version of Java everywhere. 🙂

Depending on your current setup you should check which field types were removed, which have been deprecated, what filters are no longer available, and so on.

Here are a few things to keep in mind:

Again, similar to schema.xml file, we will need to update solrconfig.xml file. It is a very good idea to start from scratch, from a minimal example, and go from there extending the configuration to match your needs.

Keep in mind that when migrating from Solr master-slave to SolrCloud the configuration will be different. First of all, all the nodes in the cluster will have the same configuration, no more separate solrconfig.xml files. No more pointing the /replication handler to the master manually, Solr will do everything for us.

Here are a few things to keep in mind:

Of course, please remember that this is not the full list of changes that have been in Solr recently and the best thing to do is start from scratch and create a new configuration or, if you really want to be thorough and understand all changes, go through all the changes listed in Solr release notes, which may not be a very easy and pleasant task 🙂

In most cases, when you migrate data from an old Solr version to a new one, like upgrading you SolrCloud between major versions it is possible to avoid data re-indexing. However, in this case, when we migrate from Solr master-slave environment to SolrCloud it is tricky and usually not worth it.

There are multiple things you should think about when handling data migration or thinking whether you should go for one. For example, just installing and trying to run SolrCloud on top of existing Solr master-slave installation is not very straightforward – you will need to manually upload data to proper directories. You may not be able to do that if you are migrating from a very old Solr – like from Solr 3 to Solr 5 or from Solr 3 or 4 to Solr 6. Running a multi-master Solr master-slave installation in most cases means a no – go for migration and requires re-indexing. Finally, if you would like to be able to roll back in case something goes terribly wrong – you may want to re-index and use a separate set of servers, instead of going for the same hardware.

What Else to Remember?

Apart from the things that we already mentioned above, there are a few other things that you need to be aware of or that are nice when it comes to the functionality.

There are a few things that you should remember when going for Solr 7. There are changes that are backward incompatible – for example, Lucene no longer supports index-time boosting. This means that you have to find a different way of handling your boosts if you are still using them – function queries and query time boosts are a way to go but will require some amount of testing.

Also one very important thing – starting from Solr 7 the maxWarmingSearchers parameter defaults to 1 and commits will now block if the limit is exceeded. In older version of Solr an exceptions has been thrown instead of blocking. This is a good change, because the commits won’t be overlapping anymore, but that forces us as users not to commit excessively, so keep that in mind.

What Could Go Wrong?

Well, pretty much everything 🙂 We suggest testing, testing and once again testing. And after you are done with tests, go through the configuration, index your data and test once again. If you have a test version of your applications that use Solr, test them with SolrCloud. Remember that there are still certain features that do not work in general SolrCloud deployments – like grouping by function queries (unless you have all the data from the given group in a single shard). That’s why testing is so important.

And the last thing – performance. Keep in mind that if you were running Solr master-slave configuration the SolrCloud performance may be slightly different. With SolrCloud you are running a fully-distributed environment and that doesn’t come for free. You may have replicas, all your Solr nodes may now be indexing data and finally, the queries may hit multiple shards, so there will be more steps needed to gather the data. So basically, do the homework and do the tests just to be sure that everything works and there is nothing or close to nothing that may result in a nasty surprise.

I’m New to Solr / SolrCloud?  What should I do?

There is a pretty simple answer to such question – you need to learn. And learning is both more fun and way faster when done with a proper trainer like Rafał Kuć from Sematext 😉 We run public and private (on site and online) Solr training classes – from Core Solr covering the basic Solr functionalities, through Intermediate Solr ending on Advanced Solr classes. You can find more about our training classes on  https://sematext.com/training/.

Of course, attending our training classes is not the only thing you can do. Solr documentation is great and visiting Apache CWiki pages to read the Apache Solr Reference Guide is always a good idea to extend you knowledge. There are also other resources on the web that can help you in learning Solr or extending your knowledge.

Finally, the Solr mailing list or Solr related IRC channel (more about them here) are a great source of Solr related knowledge.

Also, you can check here a complete guide on Solr, covering from tips to in-depth resources.