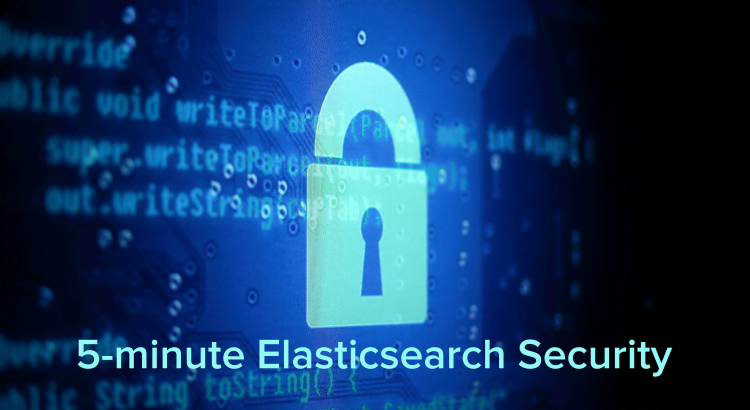 There’s no need to look outside the ELK Stack for apps to ensure data protection.

Basic Elasticsearch Security features are free and include a lot of functionality to help you prevent unauthorized access, preserve data integrity by encrypting communication between nodes, and maintain an audit trail on who did what to your stack and with the data it stores. From authentication to encryption and backup, Elasticsearch security covers everything that’s needed to safeguard your cluster.

When dealing with security breaches, there is a general plan of action. In this post we’re going to show you how to work your way through it and secure your Elastic Stack by using a few simple and free prevention methods:

From port scanning to log file manipulation, let’s drill into each of the above items with step-by-step actions to secure Elasticsearch:

The first action should be to close the relevant ports to the Internet:

If you run Kibana note that the Kibana server acts as a proxy to Elasticsearch and thus needs its port closed as well:

After this you can relax a bit! Elasticsearch won’t not reachable from the Internet anymore.

Change the configuration in elasticsearch.yml to bind only to private IP addresses or for single node instances to the loopback interface:

You can then access Elasticsearch via the SSH tunnel with from client machines e.g.

3. Set up authentication and SSL/TLS with Nginx

Add the proxy configuration with SSL and activate basic authentication to /etc/nginx/nginx.conf (note we expect the SSL certificate and key file in /etc/nginx/ssl/). Example:

Restart Nginx and try to access Elasticsearch via https://localhost/_search.

Alternatively, you could install and configure one of the several free security plugins for Elasticsearch to enable authentication:

5. Maintain an audit trail and set up alerts

As with any type of system holding sensitive data, you have to monitor it very closely.  This means not only monitoring its various metrics (whose sudden changes could be an early sign of trouble), but also watching its logs.  Concretely, in the recent Elasticsearch attacks, anyone who had alert rules that trigger when the number of documents in an index suddenly drops would have immediately been notified that something was going on. A number of monitoring vendors have Elasticsearch support, including Sematext (see Elasticsearch monitoring integration).

Logs should be collected and shipped to a log management tools in real time, where alerting needs to be set up to watch for any anomalous or suspicious activity, among other things. The log management service can be on premises or it can be a 3rd party SaaS, like Sematext Cloud. Shipping logs off site has the advantage of preventing attackers from covering their tracks by changing the logs.  Once logs are off site attackers won’t be able to get to them. Alerting on metrics and logs means you will become aware of a security compromise early and take appropriate actions to, hopefully, prevent further damage.

A very handy tool to backup/restore or re-index data based on Elasticsearch queries is Elasticdump.

To backup complete indices, the Elasticsearch snapshot API is the right tool. The snapshot API provides operations to create and restore snapshots of whole indices, stored in files, or in Amazon S3 buckets.

Let’s have a look at a few examples for Elasticdump and snapshot backups and recovery.

What about Hosted Elasticsearch?

If you have any questions, feel free to contact us. We provide professional Elasticsearch support, trainings and consulting.

Or, if you are interested in trying Sematext Cloud, our hassle-free managed ELK you don’t need to maintain and scale, here it is a short path to a free trial: