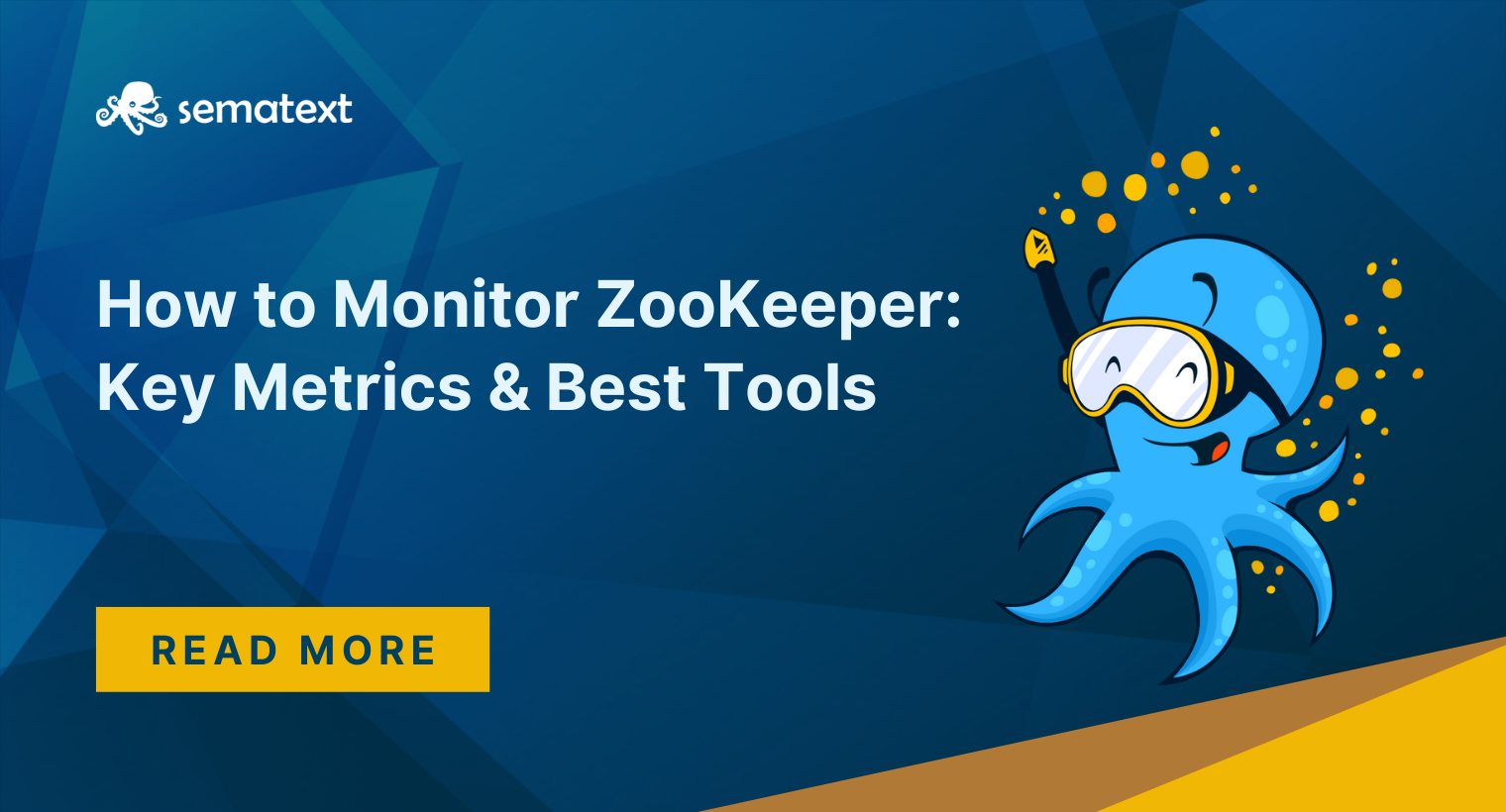 Apache Zookeeper is a great tool used by many popular tools. Your Kafka uses Zookeeper, your HDFS uses it, your SolrCloud uses it, and your ClickHouse may also be using it. No matter where you are using Apache Zookeeper, it is usually a crucial piece of the infrastructure and it needs to be reliable and fast.

The reliability part of the Apache Zookeeper is bound to its architecture and can be achieved by having a properly constructed Zookeeper ensemble – the cluster of Zookeeper nodes. The speed is something we need to be aware of and constantly monitor. We need to know how it performs, choose meaningful metrics and have an observability solution that will help us look into the metrics in real time as well as do post-mortem analysis if needed.

In this article, I will go through the most crucial Zookeeper metrics and some of the best ZooKeeper monitoring tools available to help ensure that your Zookeeper ensemble nodes are healthy and fast.

To get a sense of the performance of Apache ZooKeeper, we need metrics. We need to know what is happening to the ZooKeeper, how the operating system is behaving and what is the state of the Java Virtual Machine used to run ZooKeeper.

There are multiple metrics available in ZooKeeper, but it is worth mentioning that starting from version 3.6.0, the new metrics system has been available, which helps users monitor ZooKeeper. There are various ways of getting the metrics – via JMX, by using Prometheus with Grafana, InfluxDB, or even those Four Letter Words that ZooKeeper exposes to get some degree of information. Whatever you choose, you should know which metrics are crucial and should be measured. Let’s dive in.

The operating system is behind the scenes, but it plays a major role in your ZooKeeper health. We suggest monitoring the following metrics:

The Java Virtual Machine is the runtime environment used to run ZooKeeper. Thus it is extremely important that it remains operational and healthy. Some of the metrics worth monitoring are:

There are a few metrics that are worth looking into when it comes to ZooKeeper itself and those include:

One thing is certain – you need visibility into your infrastructure, applications, performance, etc. This is why you need to monitor your ZooKeeper ensemble and all the nodes in particular that build it. There are different approaches to monitoring it.

You can use one of the full-fledged commercial tools that provide all the necessary features out of the box. Other companies manage them and require payment. This is usually a good solution if you don’t want to spend time managing a monitoring solution in-house.

On the other side, there are awesome open source tools that can give you similar, if not the same, features but will require time and effort to manage it, keep it healthy, etc. In this section, I will compare the features, pros, cons, and pricing of the top ZooKeeper monitoring tools. 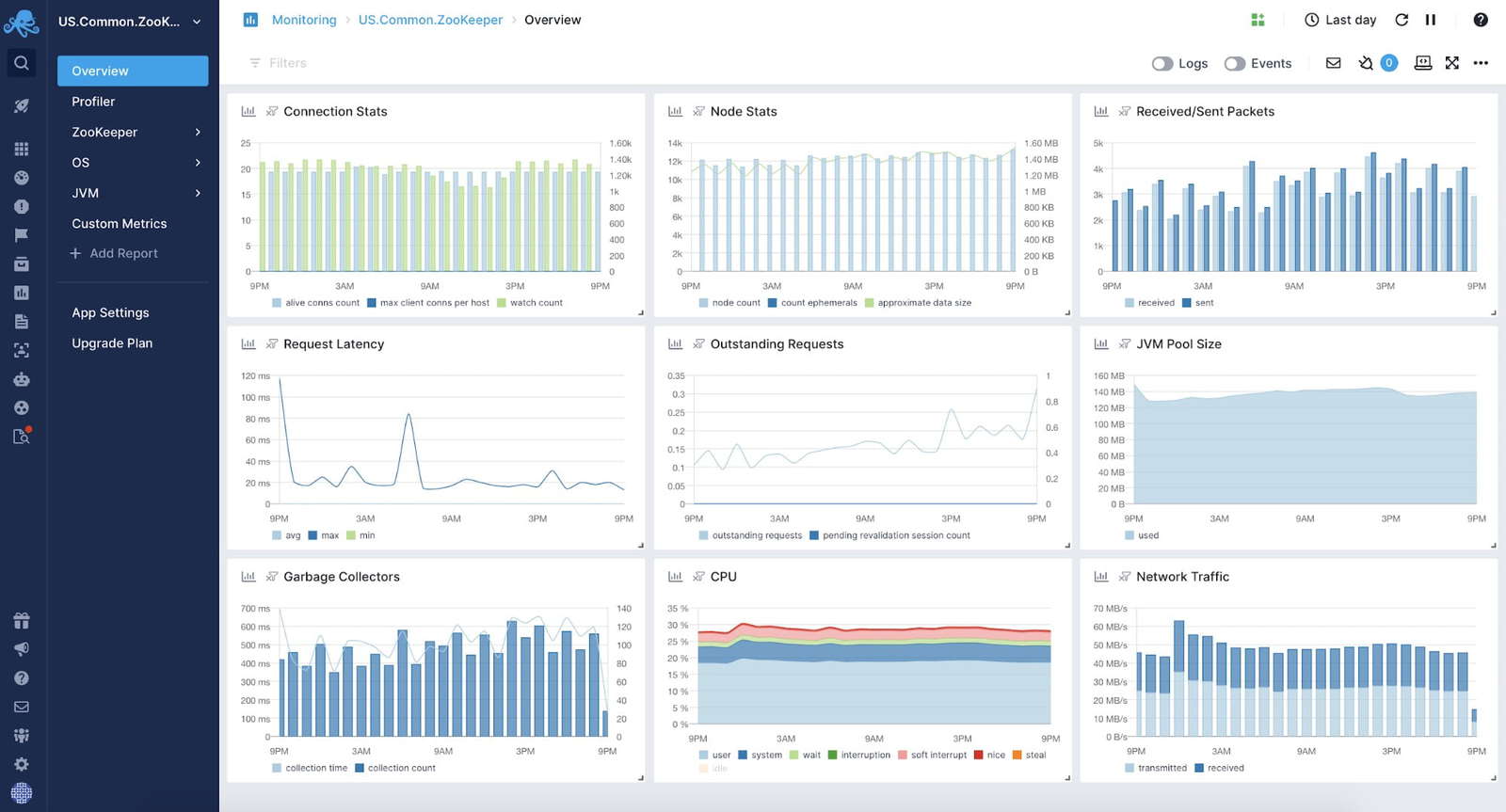 Sematext Monitoring is a full-stack monitoring tool with ZooKeeper monitoring available as a first-class citizen. Easy to set up and intuitive, it provides all that is necessary to have a complete overview of your Zookeeper ensemble – an out-of-the-box dashboard with all the operating system, Java Virtual Machine, and ZooKeeper metrics but which is easy to customize it to your needs. You can view Zookeepers metrics and be alerted using the powerful alerting engine with anomaly detection and scheduling.

The pricing for each solution is straightforward and flexible – you can have a different plan depending on your needs. ZooKeeper monitoring is metered by the hour, making it suitable for dynamic environments that scale up and down. It starts with $3.6 per host per month for the standard plan and 7 days of data retention.

Learn more about Sematext Monitoring from the video below: 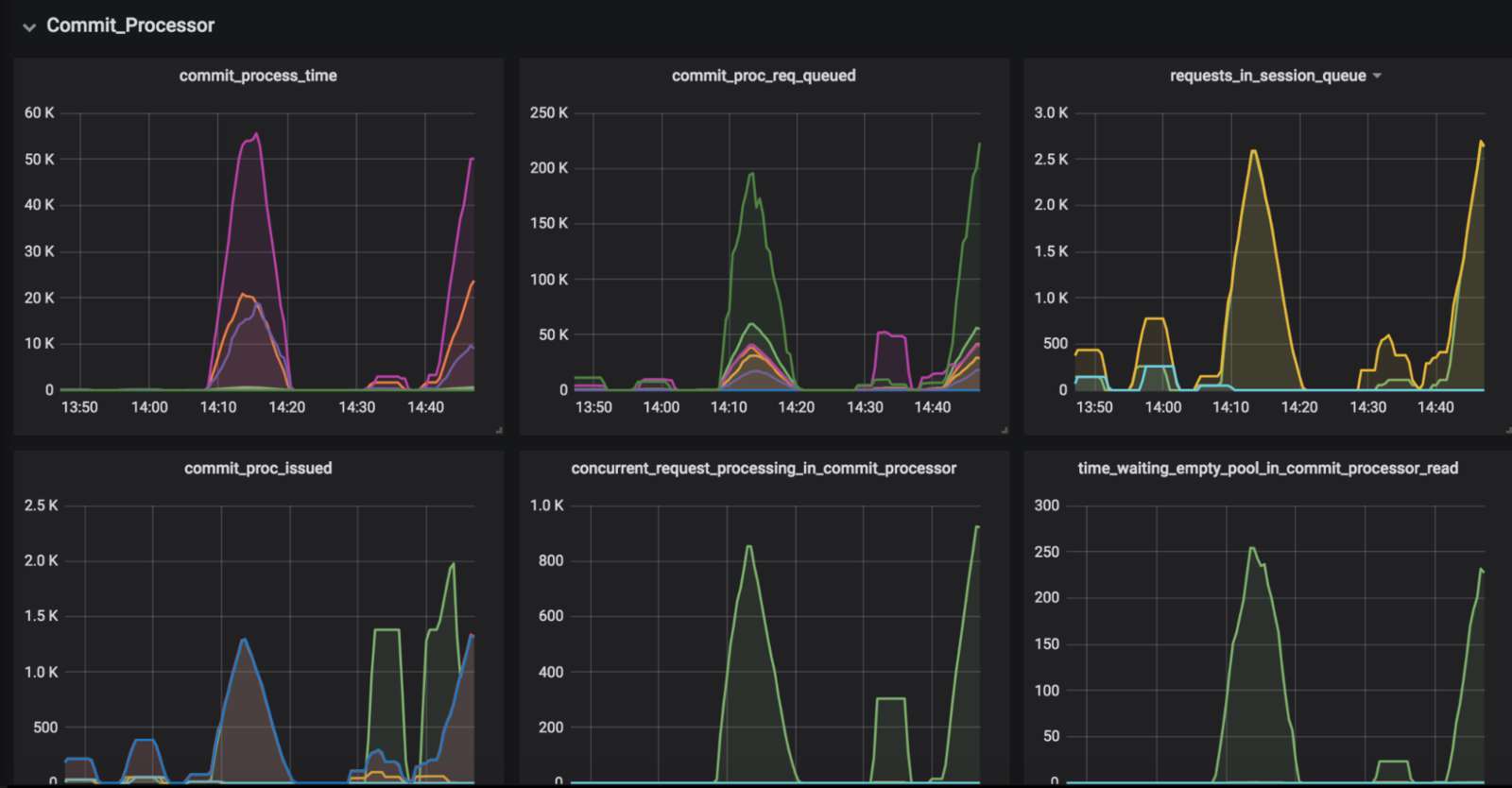 The Prometheus + Grafana combo is the only open-source ZooKeeper monitoring solution on the list, but a very powerful one allowing you to easily get the most out of your monitoring. The setup is very easy: install the Prometheus exporter following the steps in the official ZooKeeper documentation, point your Grafana to it, and you are done. You can use the Prometheus + Grafana duo to monitor ZooKeeper as well as your whole environment. The best thing is that it is not bound to metrics but can handle logs and traces, giving you the single observability tool to manage it all.

There is no pricing associated with Prometheus and Grafana, at least in the basic and self-managed version – it is an open-source solution, and the only cost is the one paid for maintaining it in your environment. 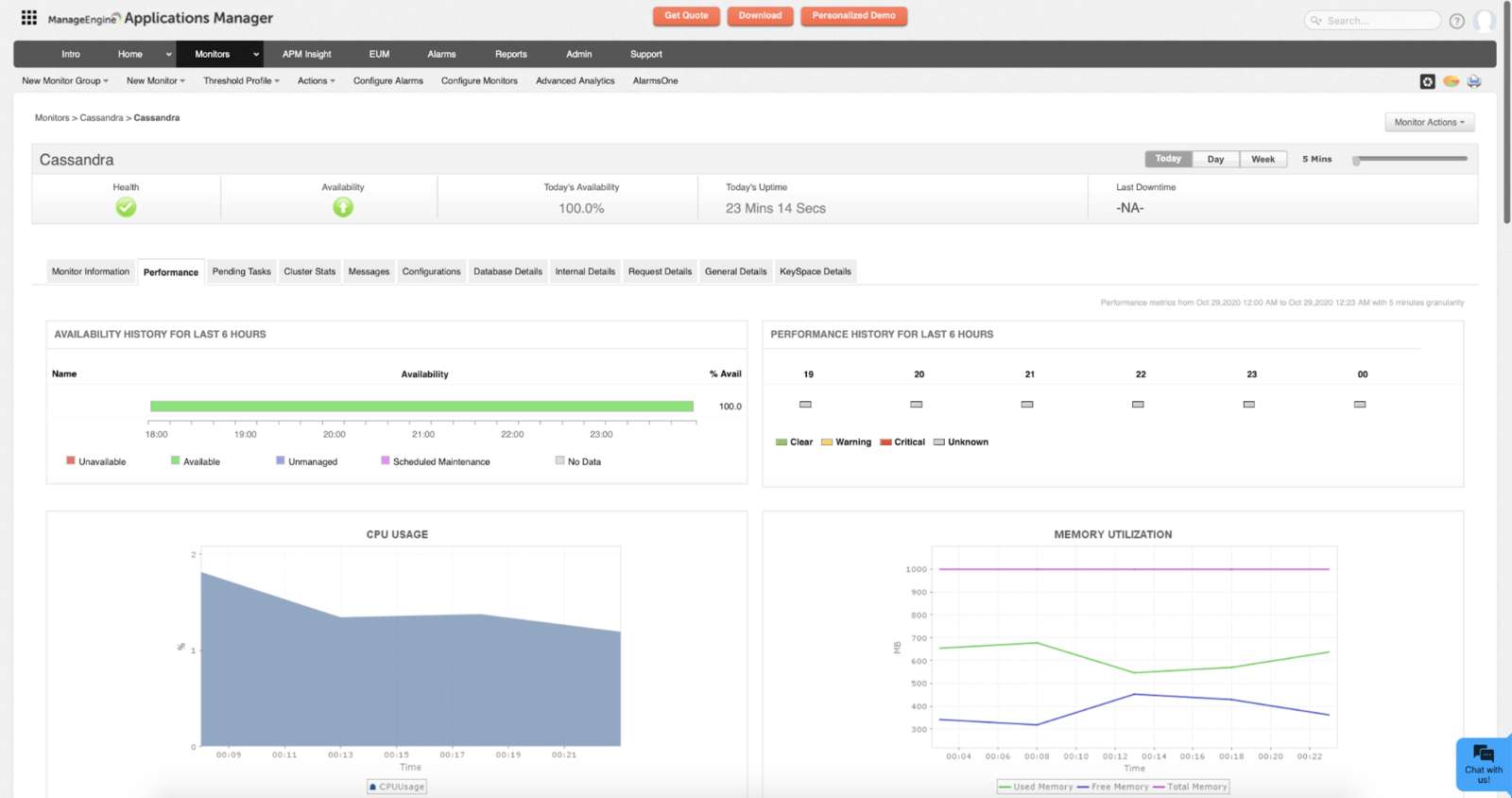 ManageEngine Applications Manager comes in two versions – Professional and Enterprise. The pricing depends on the selected version, the number of monitors, and the number of users using the product with the free version available. 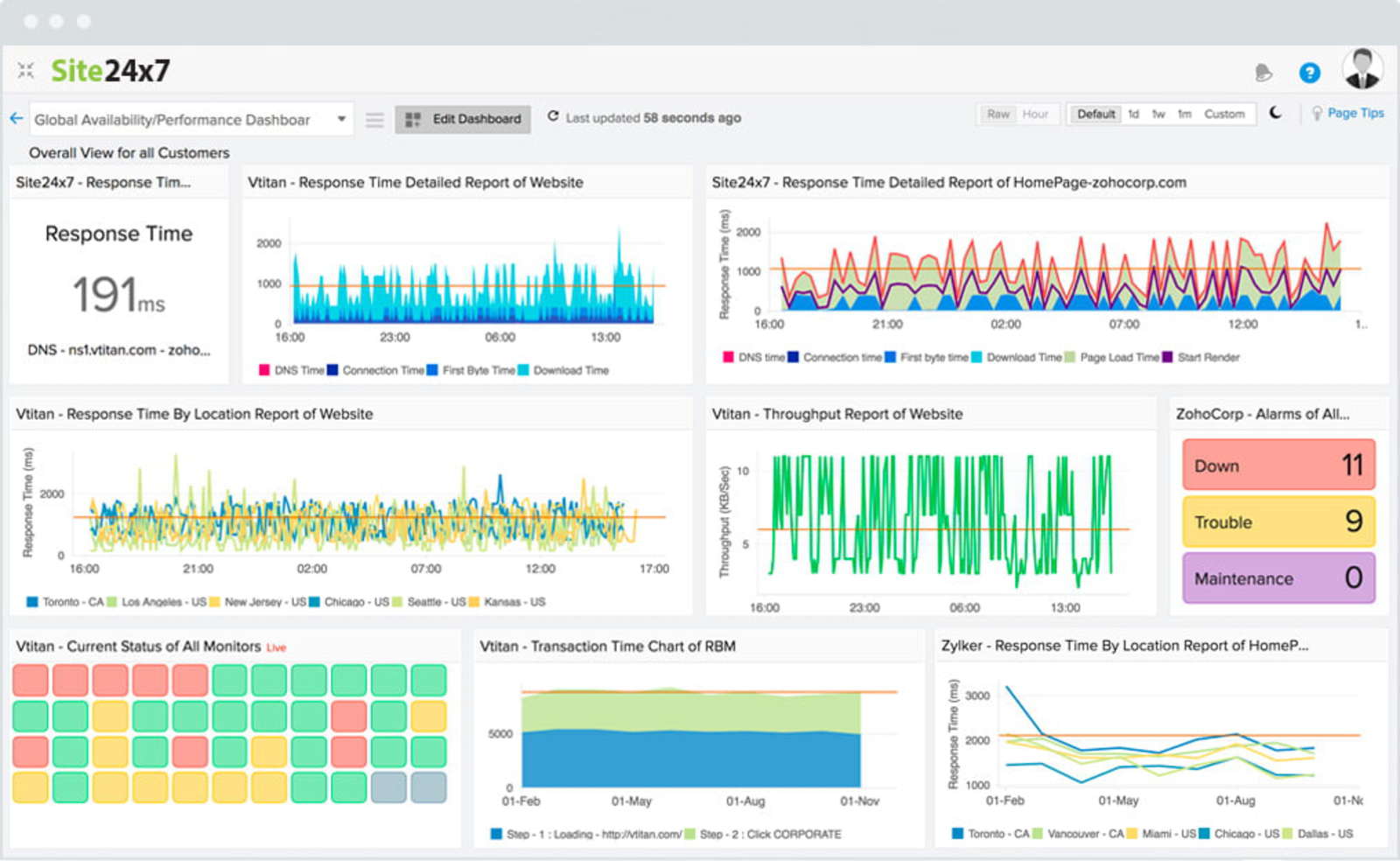 Site 24×7 is a cloud monitoring tool with the Apache ZooKeeper monitoring integration available. It provides all the necessary metrics to get complete visibility into your Apache ZooKeeper ensemble. The service allows you to set up alerts based on advanced rules to limit alert fatigue and get immediate insights. You can monitor not only ZooKeeper but also your servers and over 50 additional technologies running inside your infrastructure, including commonly used technologies such as MySQL.

Pricing varies depending on what parts of the product that you want to use. The annual billing plan for APM starts at $35 per month for up to 3 applications, 40 servers and up to 500MB of logs. If you want to track the servers where ZooKeeper is running, you have to opt for infrastructure monitoring which starts at 9 euros per month when billed annually for up to 10 servers, 500MB of logs, and 100K page views for a single site. For a monthly fee, you can purchase additional add-ons. 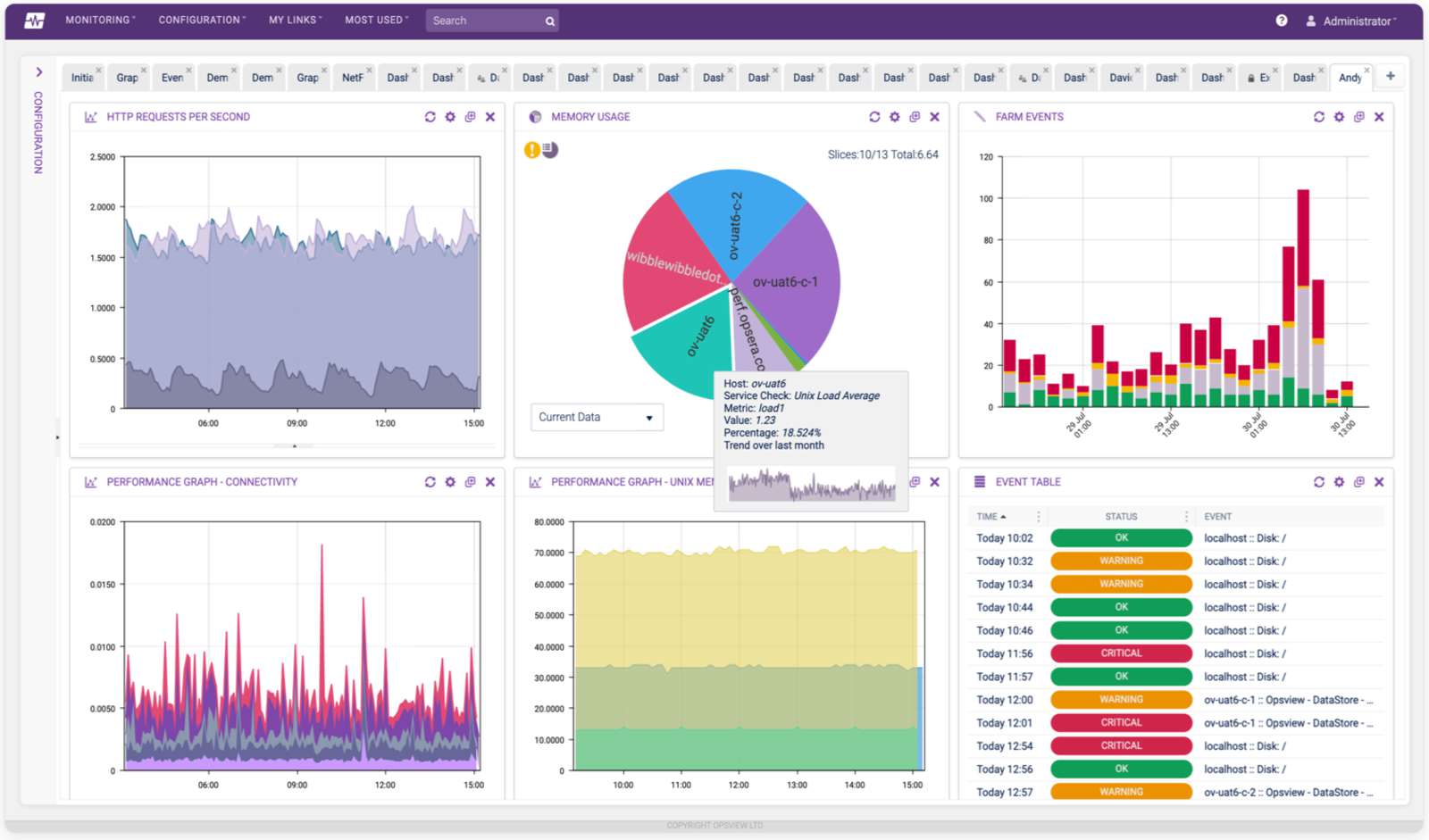 OpsView is the all-in-one monitoring system providing monitoring coverage for your cloud platform, on-premises infrastructure, containerized and virtualized environment, and applications including Apache ZooKeeper. With the Opspacks extensions you can monitor more than 200 infrastructure elements with more than 2000 additional extensions available via the Nagios Exchange. Finally, OpsView is designed and architecture to grow with you, so you don’t have to worry about the size of your infrastructure.

The pricing is available on request, but the official pricing page mentions a starting price of 9 euro per host per month in the cloud version. 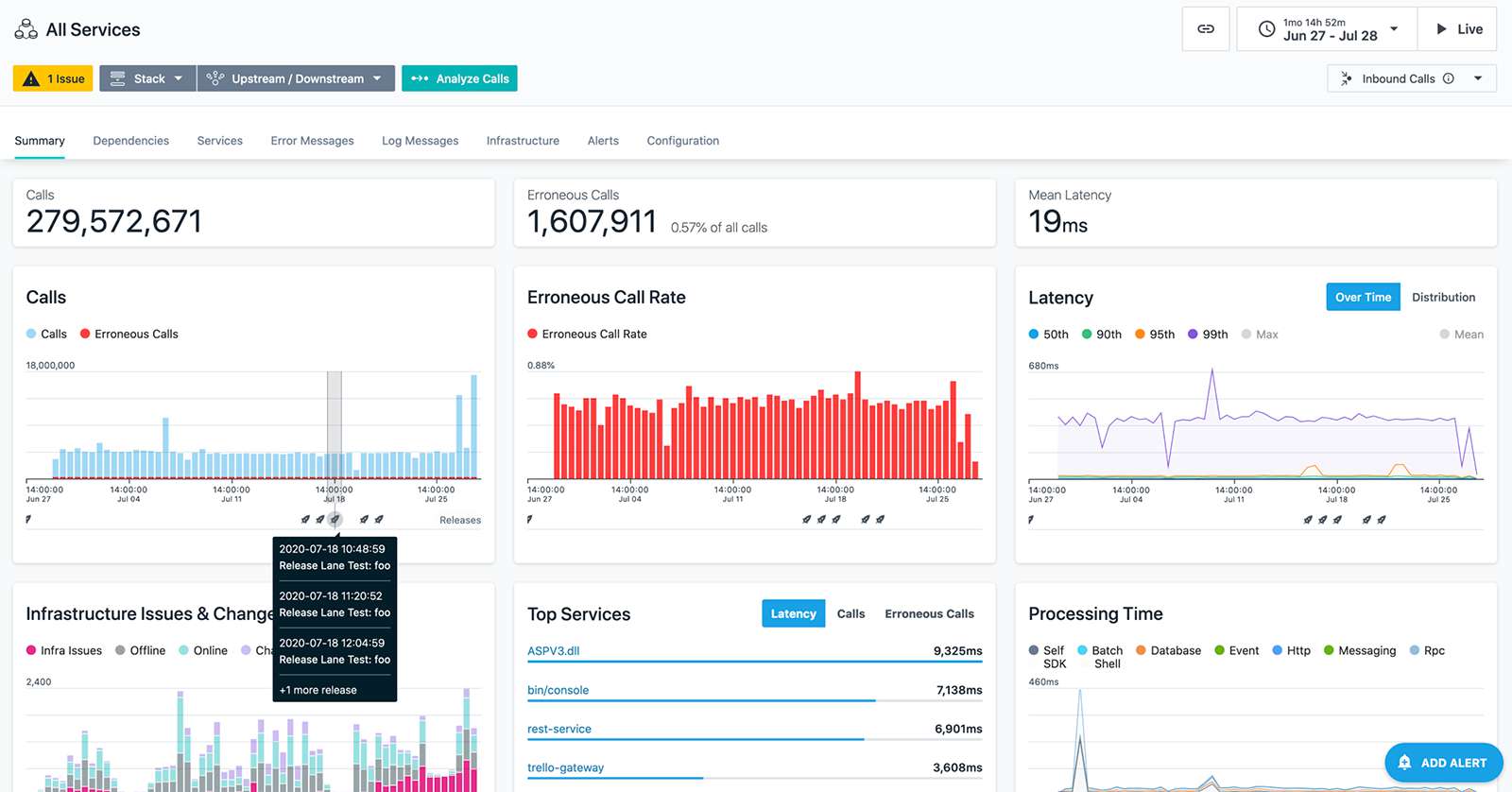 Instana ZooKeeper monitoring gives you the view of the necessary metrics for a single ZooKeeper node as well as the working ensemble. It doesn’t only focus on ZooKeeper metrics but also on data such as version, client, mode, and state in a distributed environment. Combined with out-of-the-box alerting, Instana provides a valuable observability solution for your ZooKeeper ensemble.

Instana pricing for the SaaS version costs $75 per host per month, with the minimum number of hosts set to 10, which gives it a starting price of $750/month. The self-hosted solution is priced at $93.80 with minimum 10 hosts. 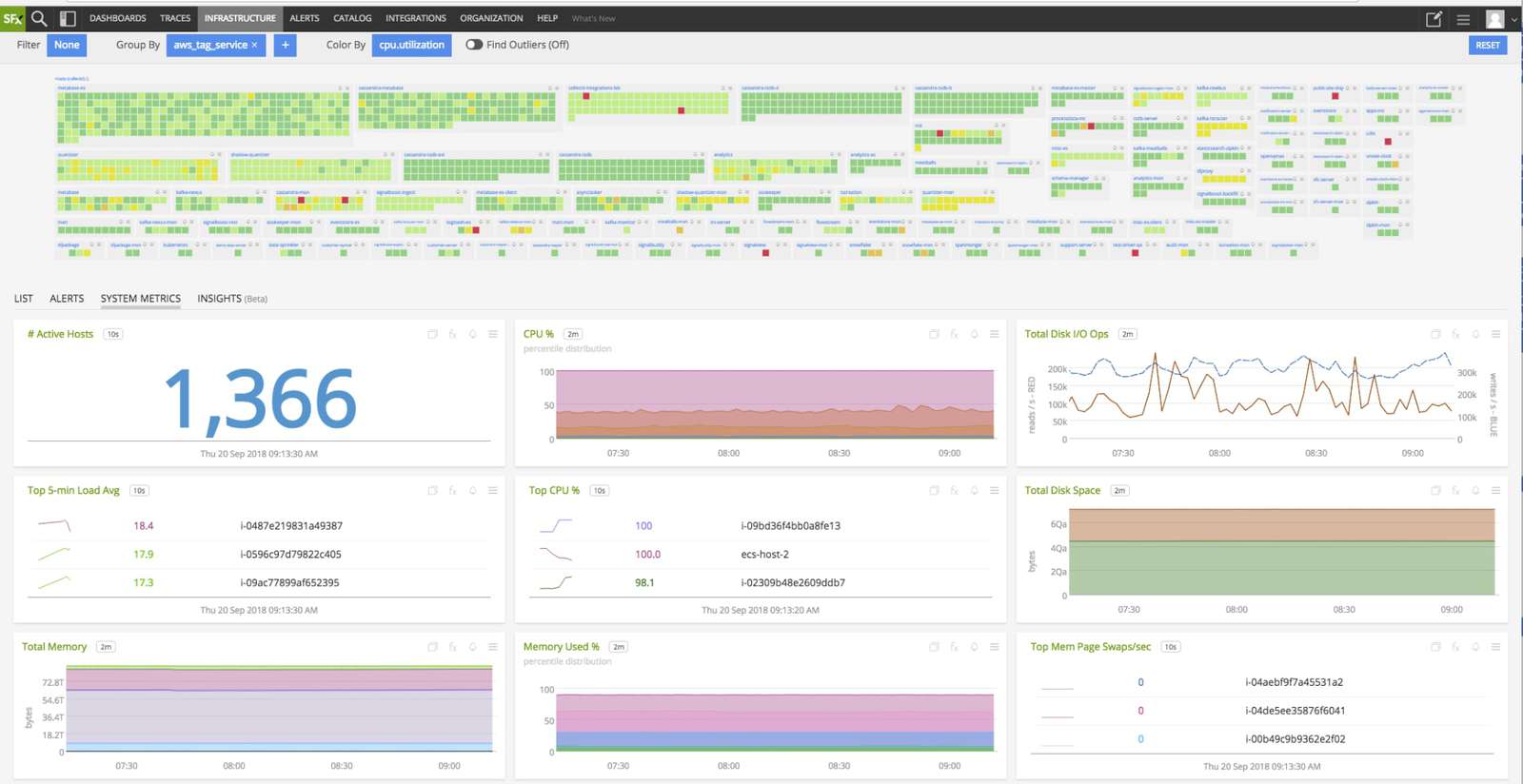 Formerly SignalFx, now Splunk APM, provides a versatile observability platform with Apache ZooKeeper monitoring as a CollectD plugin. It gives you a view over the crucial ZooKeeper metrics no matter which environment you run your ZooKeeper on – whether it is a cloud environment or a private bare metal server.

SignalFx provides two types of pricing – host and usage-based pricing. The host-based pricing starts at $55 per host per month when billed annually with the AlwaysOn Profiling starting with $3 a month for 1.7MB/min profiling volume.

Datadog is a comprehensive software as a service monitoring solution with ZooKeeper monitoring capabilities. Without an additional installation, it provides all the ZooKeeper metrics that you need to asses the health and performance of your ensemble. For improved visibility, you can easily configure Datadog to collect ZooKeeper logs. The tool features anomaly detection and alerting based on machine learning that instantly let’s you know whenever your ZooKeeper is underperforming

AppDynamics offers monitoring tools with an Apache ZooKeeper addon in both a software as a service and an on-premise model. It offers support for ZooKeeper monitoring regardless of the environment you run your ensemble on. Besides tracking ZooKeeper metrics, you can also use AppDynamics to get information about your entire infrastructure, from VMs to containers, business performance metrics, and more.

Pricing depends on the number of CPU Cores and the plan variant. For US based companies the plan that includes application performance monitoring and infrastructure monitoring for full ZooKeeper visibility is listed as $60/month per CPU Core.

Get Started with ZooKeeper Monitoring

ZooKeeper is a distributed system and monitoring it is necessary if you want to ensure that your cluster stays healthy and perfectly working. After all, it needs to provide all its features with the best performance possible so that the system that relies on it doesn’t suffer. The ZooKeeper performance monitoring tool must provide metrics in three key areas – the operating system, the Java Virtual Machine, and the ZooKeeper itself.

Sematext Monitoring with its ZooKeeper monitoring integration, checks all these boxes and more. Give it a try! You have a 14-day free trial to test all its capabilities.