When we say “logs” we really mean any kind of time-series data: events, social media, you name it. See Jordan Sissel’s definition of time + data. And when we talk about autoscaling, what we really want is a hands-off approach at handling Elasticsearch/OpenSearch clusters.

In this post, we’ll show you how to use a Kubernetes Operator to autoscale Elasticsearch clusters, going through the following with just a few commands:

Why Use an Operator for Scaling?

Kubernetes, on its own, can help you spawn an Elasticsearch/OpenSearch cluster. Typically, you’d have a StatefulSet for your data nodes, one for your Master nodes, define the number of nodes you want, and you’re all set. The cluster is up.

But taking care of the Elasticsearch/OpenSearch cluster requires some operational understanding. Say you need to do a rolling restart. Perhaps because of an upgrade or just a configuration change. You can’t simply go around killing all pods in the StatefulSet and rely on Kubernetes to restart them, because you have to make sure that at least one copy of every shard is up at all times. So when you remove a Kubernetes pod, you need to wait for it to be re-created and completely recovered before proceeding to the next one.

This is where Operators come in handy. Think of them like sidecar pods that can carry any kind of logic. They can be aware of your use-case and check to see if there’s something to reconcile between the current state and the desired state. You can tell the operator to do a rolling restart, for example, and it will know what to do. Some Elasticsearch/OpenSearch operators can do autoscaling as well, let’s check them out.

There are lots of Elasticsearch and OpenSearch operators out there, but unfortunately many of them are not actively maintained. That said, there are some which we would recommend using:

Elastic Cloud on Kubernetes. It’s the official operator for Elasticsearch and we wrote a how-to for it here. Unfortunately, it’s not really open-source, since it’s under the Elastic license. Also, you’ll need an Enterprise license to use the autoscaling functionality.

OpenSearch K8s Operator. The go-to Operator for OpenSearch. It’s open-source but, at the time of this writing, it doesn’t have autoscaling. But we did some experiments and it’s relatively easy to plug in logic that adds and removes nodes, since this Operator knows how to handle new nodes and how to drain nodes that you want to remove.

es-operator. This is an Operator that Zalando is using for a while in production. It’s open-source and it already supports autoscaling for the Enterprise Search use-case (i.e. data that isn’t time series). It can scale based on CPU or based on the number of shards per node. It can also automatically add replicas if you have more nodes than shards.

We modified es-operator to work for the time-series use-case. Namely, to handle index templates, lifecycle policies and autoscaling when you keep creating and removing indices, rolling them over by size.

In the rest of this article, we’ll show the main ideas behind this Operator and how it implements them. Through a demo, of course 🙂

How to Autoscale Elasticsearch?

Now let’s set up an OpenSearch cluster. We’ll need to go through a few steps, all covered here. You can do this on your local machine or on any Kubernetes cluster.

If you have Docker for Desktop’s Kubernetes, you’ll need to start by installing the Metrics Server:

Next up, let’s set up permissions. Our operator will need to be able to create the OpenSearch pods, for example. This is what our next RBAC-focused YAML file will do, and we’re going to apply those permissions to a separate namespace called demo:

Before we deploy the operator itself, we need to define the configuration it’s supposed to work on. This is what the Custom Resource Definitions do. In this case, we’ll define things like scaleUpDiskUsagePercentBoundary – when nodes reach X% disk space, we scale up the cluster:

Now we’re ready to deploy the operator. It will be a deployment with one replica (i.e. we’ll have one instance of the operator):

It should be up and running now in your demo namespace:

Now we’re ready to start the initial OpenSearch pods. Our operator will only manage data nodes, so we’ll deploy the master node(s) separately as a StatefulSet:

You can use kubectl -n demo get pods again to see the OpenSearch master pod. In elasticsearch-cluster.yaml, we also have a Service that exposes port 9200, so we can do a port-forward to this service and talk to the master node:

Finally, let’s add the data nodes, managed by the operator. This is where we put all the interesting options, such as the minimum and maximum number of data nodes (minReplicas and maxReplicas respectively), when to scale up, etc.

We’ll discuss more options in the next section, but for now, let’s take a look at what we have:

Speaking of scaling up, let’s see how this works.

The main challenge, as clusters scale up or down, is to keep the load between nodes balanced. In other words, to prevent hotspots. For example, let’s consider this 4-node cluster with two indices: logs01 and logs02. 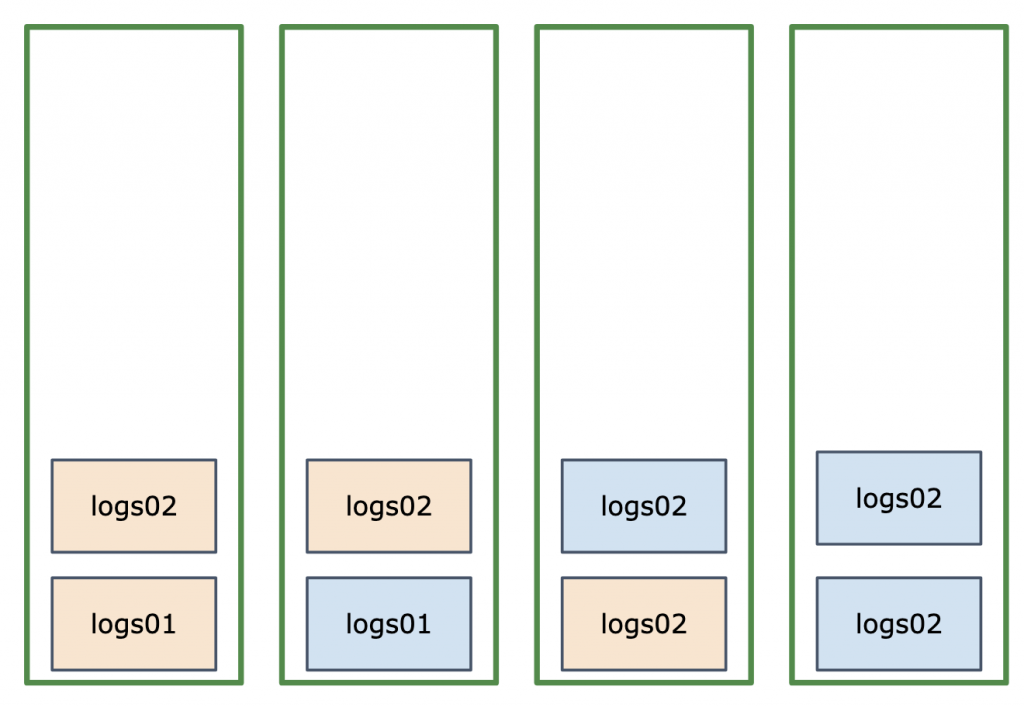 On the surface, it looks balanced: OpenSearch tries to balance shards and even indices if possible. But in the case of time series data we write to the write alias, which points to the last index (logs02). And writing is often the main workload. In the above example, we have two shards of logs02 on the last two nodes, so we can expect them to take more load. 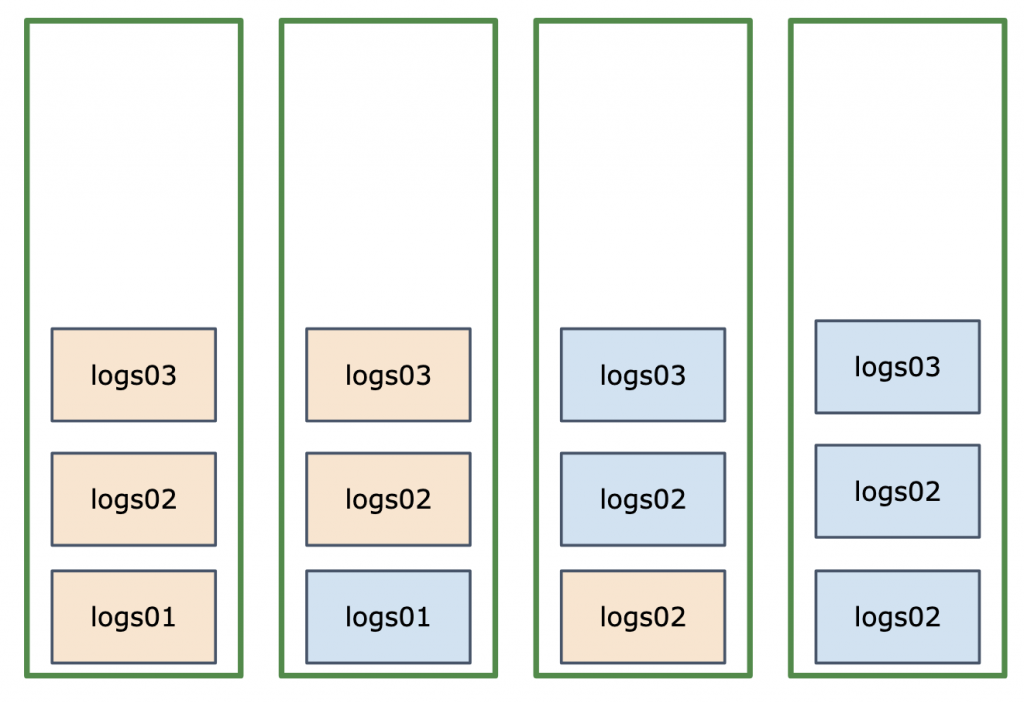 As you can see, our cluster is now balanced for writes, too – especially if we enforce this balance via total_shards_per_node. Which is also managed by the operator – let’s continue the tutorial and see how the Elasticsearch cluster autoscales up or down.

With the demo configuration, the cluster will scale up if any of the following happen (all configurable in es-data1.yaml):

In practice, you’ll likely only configure disk usage, because you’ll normally know with your dataset that you need to add nodes at a specific threshold. You can set other thresholds to very high values, so that they don’t get in the way.

If you’re still tailing the logs of the es-operator pod, you should see exactly what happens:

Going back to es-data1.yaml, we scale down if we don’t have a reason to scale up, but at least one of the following happens:

If you’re running this demo on a local Docker Desktop, you can simulate a scale-down by reverting the change you made in the previous section and applying es-data1.yaml again. If you had your cluster scaled up due to load or indexed data, reduce the load or remove some indices. Then you will notice what happens during scale down in the operator’s logs:

If you can’t/don’t want to do the demo above, maybe you want to watch it on a multi-node Kubernetes cluster on AWS. We did that + a lot more explaining, during Berlin Buzzwords. Scaling up and down was done by indexing some dummy data.

If you prefer slides, check them out here:

Autoscaling Elasticsearch/OpenSearch is definitely something you can do with Kubernetes operators. For E-commerce and other flat-index use-cases, the ecosystem is quite mature already. For logs and other time-series data, you need some additional logic in order to maintain cluster balance. But that’s also doable, as you saw in this article.