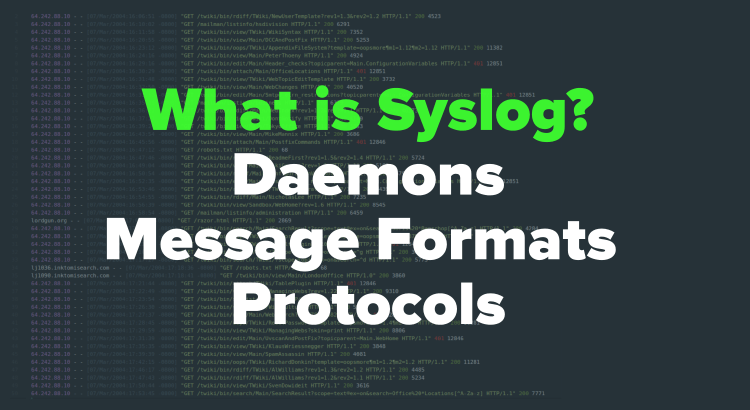 Pretty much everyone’s heard about syslog: with its roots in the 80s, it’s still used for a lot of the log management done today. Mostly because of its long history, syslog is quite a vague concept, referring to many things. Which is why you’ve probably heard:

In this post, we’ll explain the different facets by being specific: instead of saying “syslog”, you’ll read about syslog daemons, about syslog message formats and about syslog protocols.

Note the plurals: there are multiple options for each. We’ll show the important ones here to shed some light over the vague (and surprisingly rich) concept. Along the way, we’ll debunk some of the myths surrounding syslog. For example, you can choose to limit messages to 1K and you can choose to send them via UDP, but you don’t have to – it’s not even a default in modern syslog daemons.

A syslog daemon is a program that:

This is where syslog is often referring to syslogd or sysklogd, the original BSD syslog daemon. Development for it stopped for Linux since 2007, but continued for BSDs and OSX. There are alternatives, most notably:
* rsyslog. Originally a fork of syslogd, it still can be used as a drop in replacement for it. Over the years, it evolved into a performance-oriented, multipurpose log management tool, that can read data from multiple sources, parse and enrich logs in various ways, and ship to various destinations
* syslog-ng. Unlike rsyslog, it used a different configuration format from the start (rsyslog eventually got to the same conclusion, but still supports the BSD syslog config syntax as well – which can be confusing at times). You’d see a similar feature set to rsyslog, like parsing unstructured data and shipping it to Elasticsearch or Kafka. It’s still fast and light, and while it may not have the ultimate performance of rsyslog (depends on the use-case, see the comments section), it has better documentation and it’s more portable
* nxlog. Yet another syslog daemon which evolved into a multi-purpose log shipper, it sets itself apart by working well on Windows

In essence, a modern syslog daemon is a log shipper that works with various syslog message formats and protocols. If you want to learn more about log shippers in general, we wrote a side-by-side comparison of Logstash and 5 other popular shippers, including rsyslog and syslog-ng.

The one we come across most often is that syslog daemons are no good if you log to files or if you want to parse unstructured data. This used to be true years ago, but then so was Y2K. Things changed in the meantime. In the myth’s defense, some distributions ship with old versions of rsyslog and syslog-ng. Plus, the default configuration often only listens for /dev/log and kernel messages (it doesn’t need more), so it’s easy to generalize.

Although RFC suggests it’s a standard, RFC3164 was more of a collection of what was found in the wild at the time (2001), rather than a spec that implementations will adhere to. As a result, you’ll find slight variations of it. That said, most messages will look like the RFC3164 example:

This is how the application should log to /dev/log, and you can see some structure:

This isn’t a syslog message format, it’s just how most syslog deamons write messages to files by default. Usually, you can choose how the output data looks like, for example rsyslog has templates.

RFC5424 came up in 2009 to deal with the problems of RFC3164. First of all, it’s an actual standard, that daemons and libraries chose to implement. Here’s an example message:

Now we get an ISO-8601 timestamp, amongst other improvements. We also get more structure: the dashes you can see there are places for PID, message ID and other structured data you may have. That said, RFC5424 structured data never really took off, as people preferred to put JSON in the syslog message (whether it’s the old or the new format). Finally, the new format supports UTF8 and other encodings, not only ASCII, and it’s easier to extend because it has a version number (in this example, the 1 after the priority number).

Myths around the syslog message formats

The ones we see more often are:

Originally, syslog messages were sent over the wire via UDP – which was also mentioned in RFC3164. It was later standardized in RFC5426, after the new message format (RFC5424) was published.

Modern syslog daemons support other protocols as well. Most notably:

Besides writing to files and communicating to each other, modern syslog daemons can also write to other destinations. For example, datastores like MySQL or Elasticsearch or queue systems such as Kafka and RabbitMQ. Each such destination often comes with its own protocol and message format. For example, Elasticsearch uses JSON over HTTP (though you can also secure it and send syslog messages over HTTPS).

The ones we hear most come from the assumption that UDP is the only option, implying there’s no reliability, authorization or encryption.

The other frequent one is that you can’t send multiline messages, like stack traces. This is only true for TCP syslog, if newlines are used for delimiting. Then, a stacktrace will end up as multiple messages at the destination – unless its newlines are escaped at the source and reverted at the destination. With UDP, multiline logs work out of the box, because you have one message per datagram. Other protocols (TLS, RELP and octet-delimited TCP) also handle multiline logs well, by framing messages.

Hopefully this post helped clear the fog around syslog. If you’re looking for tips on how to configure your syslog daemon, you can find a lot of them on this blog. We especially love the topic of centralizing logs with Elasticsearch. That’s because we run Sematext Logs, our logging SaaS that exposes the Elasticsearch API which supports all the syslog we discussed here in terms of message formats (including JSON over syslog) and protocols (UDP, TCP, TLS, RELP).

You can sign up and get a free Logsene trial here. You’ll find configuration samples for all major log shippers (including the syslog daemons discussed in this post).

If you’re looking to build a log-centralization solution for yourself, we can help: either through logging consulting or trainings on Elasticsearch and its logging ecosystem. If you’re into logging in general and want to build such solutions for others, we’re hiring worldwide.