TL;DR note: if you want the bzip2 -9 version of this post, scroll down to the very last section for some quick pointers.

If you want to learn a bit about Linux system logs, please continue, as we’ll talk about all these and more: 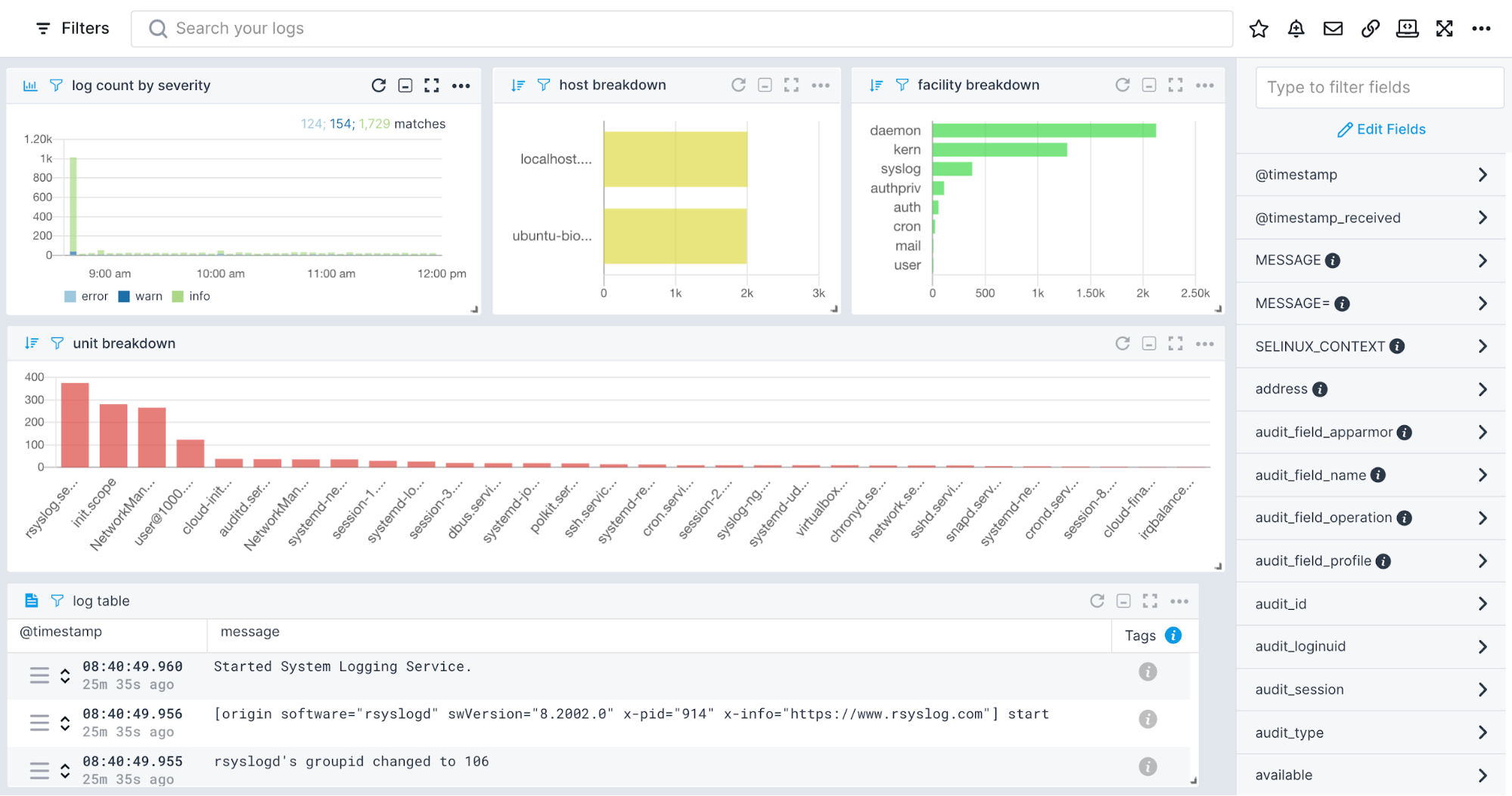 Short Recap: What Are Linux Logs?

Linux logs are pieces of data that Linux writes, related to what the server, kernel, services, and applications running on it are doing, with an associated timestamp. They often come with other structured data, such as a hostname, being a valuable analysis and troubleshooting tool for admins when they encounter performance issues. If you’re new to logs, we explain more about the benefits of logging in our log management guide.

Here’s an example of SSH log from /var/log/auth.log directory:

These sources can interact with each other: journald can forward all its messages to syslog. Applications can write to syslog or the journal. It’s Linux, where everything is configurable.

But for now, we’ll focus on the defaults: where can you typically find different types of logs in most modern distributions?

Linux Logs Location: Where Are The Files Stored?

Typically, you’ll find Linux server logs in the /var/log directory and sub-directory. This is where syslog daemons are normally configured to write. It’s also where most applications (e.g., Apache HTTPD) write by default.

For Systemd journal, the default location is /var/log/journal, but you can’t view the files directly because they’re binary. So how do you view them?

How to Check Linux Logs

If your Linux distro uses Systemd (and most modern distros do), then all your system logs are in the journal. You can view them with journalctl, and you can find the most important journalctl commands here.

If your distribution writes to local files via syslog, you can view them with standard text processing tools, such as cat, less or grep:

If you’re using auditd to manage audit logs, you can check them in /var/log/audit.log by default, but you can also search them with ausearch. That said, you’re better off shipping these security logs to a central location, especially if you have multiple servers. For this task, a tool like Auditbeat might work better than auditd. We wrote a separate tutorial on centralizing audit logs with Auditbeat, but in the next section, we’ll focus on centralizing Linux system logs in general.

System logs can be in two places: systemd’s journal or plain text files written by a syslog daemon. Some distributions (e.g., Ubuntu) have both: journald is set up to forward to syslog. This is done by setting ForwardToSyslog=Yes in journald.conf.

If the distribution has systemd, our recommendation is to use journal-upload for log aggregation. You can check this by running journalctl – if the command isn’t found, you don’t have the journal. As promised earlier, you can centralize your system logs to Sematext Cloud with three commands:

Alternatively, you can use Logagent’s journal-upload input to gather journal entries from one or more machines, before shipping them to a central location. That central location can be Sematext Cloud, a local ELK stack or something else: 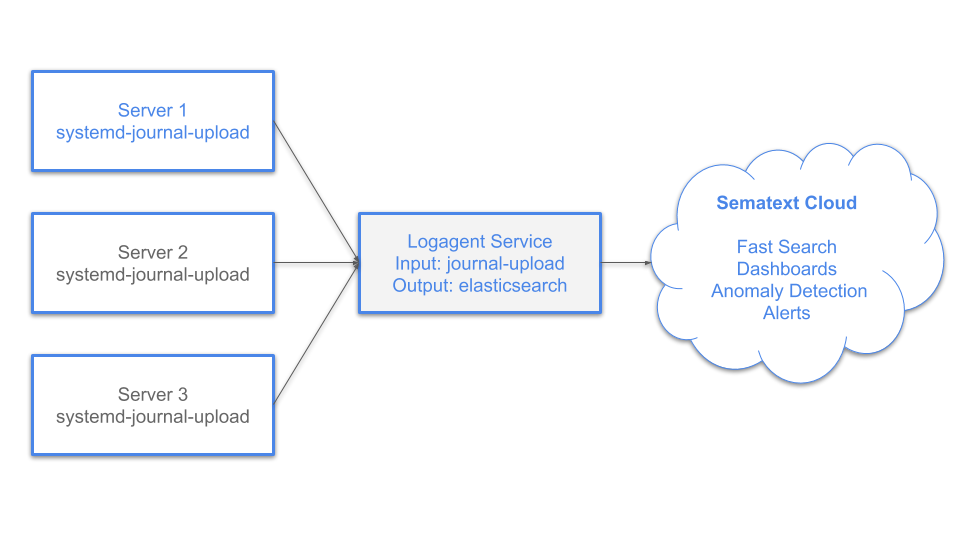 There are a few scenarios in which centralizing Linux logs with syslog might make sense:

In all situations listed above, data will go through your syslog daemon. From there, you can send it to any of the supported destinations.

Most Linux distributions come with rsyslog installed. To forward data to another syslog server via TCP, you can add this line in your /etc/rsyslog.conf:

This particular line will forward data to Sematext Cloud’s syslog endpoint, but you can replace logsene-syslog-receiver.sematext.com with the host name of your own syslog server.

Some syslog daemons can output data to Elasticsearch via HTTP/HTTPS. rsyslog is one of them and so is syslog-ng. For example, if you use rsyslog on Ubuntu, you’ll install the Elasticsearch output module first:

Then, in the configuration file, you need two elements:

The above example shows how to send messages to Sematext Cloud’s Elasticsearch API, but you can adjust the action element to point it to your local Elasticsearch:

Whether you use a syslog protocol, the Elasticsearch API, or something else, it’s better to forward syslog directly from the syslog daemon than to tail individual files from /var/log using a different log shipper. Tailing files will add overhead and miss some of the metadata, such as facility or severity.

Which is not to say that files in /var/log are useless. You’ll need them in two scenarios:

By default, some distributions write system logs to syslog (either directly or from the journal). The syslog daemon writes these logs to files under /var/log. Typically that syslog daemon is rsyslog, though syslog-ng works in a similar fashion.

In this section, we’ll look at the important log files and:

This is the “catch-all” of syslog. For example:

Typically, you’ll find all messages here (error logs, informational messages, and every other severity), as this line from /etc/rsyslog.conf suggests:

The only exception is the stop action. For example, you may find something like this:

In plain English, this block says:

So if the /var/log/syslog action comes later, it won’t write UFW messages there.

If there’s nothing in /var/log/syslog or /var/log/messages, you probably have journald set up not to forward to syslog. The same data (and more) can be viewed via journalctl with no parameters. By default, journalctl pages data through less, but if you want to filter through grep you’ll need to disable paging:

This is where kernel messages go by default:

It’s really down to filtering syslog messages by the kern facility:

If you don’t have syslog (or the file is missing) and you have journald, you can show kernel messages in journalctl:

This is where you find authentication messages, generated by services like sshd:

This is another filter by facility, this time by two values (auth and authpriv):

You can do such filters in journalctl as well, except that you have to provide numeric facility levels:

This is where your cron messages go (i.e., jobs that run regularly):

Yet another facility filter:

With journalctl, you’d do:

Email daemons such as Postfix typically log to syslog in the mail facility, just like cron logs to the cron facility. Then, rsyslog puts these logs in a different file:

If you’re using journald, you can still view mail logs with:

Because journald exposes the syslog API, everything that normally goes to syslog ends up in the journal.