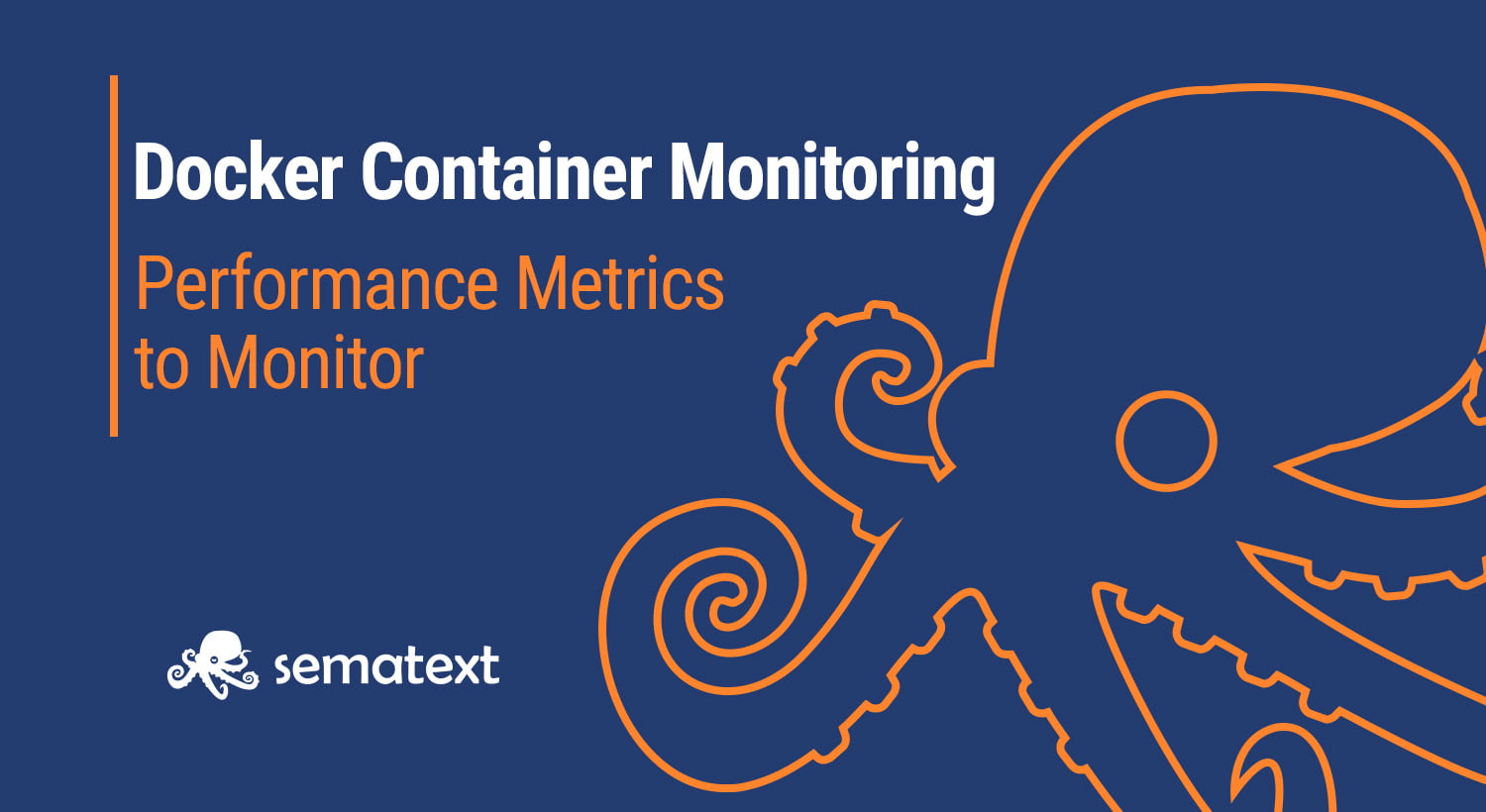 In Part 1 we’ve described what container monitoring is and why you need it. Because each container typically runs a single process, has its own environment, utilizes virtual networks, or has various methods of managing storage. Traditional monitoring solutions take metrics from each server and the applications they run. These servers and applications running on them are typically very static, with very long uptimes. Container deployments are different: a set of containers may run many applications, all sharing the resources of one or more underlying hosts. It’s not uncommon for Docker servers to run thousands of short-term containers (e.g.. for batch jobs) while a set of permanent services runs in parallel. Traditional monitoring tools not used to such dynamic environments are not suited for such deployments.

On the other hand, some modern monitoring solutions were built with such dynamic systems in mind and even have out of the box reporting for Docker monitoring. Moreover, container resource sharing calls for stricter enforcement of resource usage limits, an additional issue you must watch carefully. To make appropriate adjustments for resource quotas you need good visibility into any limits containers may have reached or errors they may have encountered or caused. We recommend using monitoring alerts according to defined limits; this way you can adjust limits or resource usage even before errors start happening. 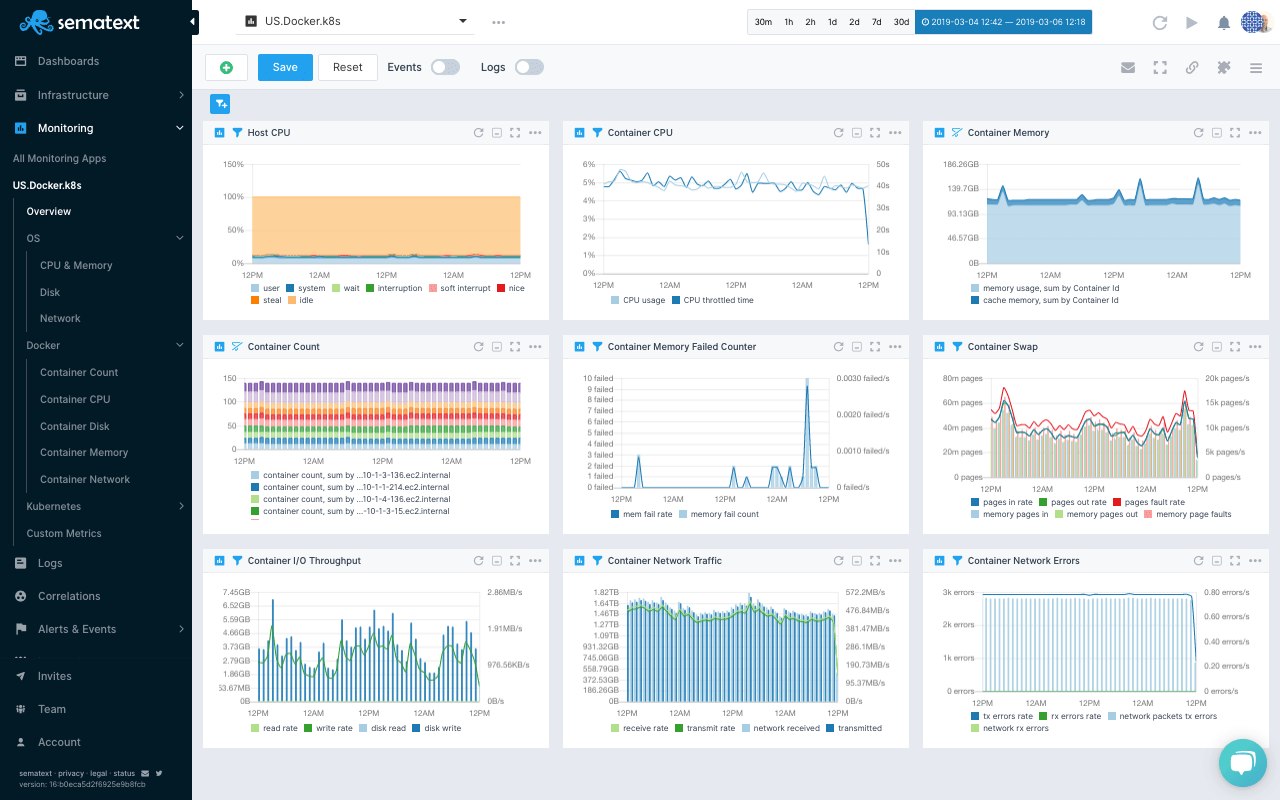 Note: All screenshots in this post are from Sematext Cloud and its Docker monitoring integration.

Watch Resources of Your Docker Hosts

Understanding the CPU utilization of hosts and containers helps one optimize the resource usage of Docker hosts. The container CPU usage can be throttled in order to avoid a single busy container slowing down other containers by using up all available CPU resources.  Throttling the CPU time is a good way to ensure the minimum of processing power needed by essential services – it’s like the good old nice levels in Unix/Linux.

When the resource usage is optimized, a high CPU utilization might actually be expected and even desired, and alerts might make sense only for when CPU utilization drops (think service outages) or increases for a longer period over some max limit (e.g. 85%).

The total memory used in each Docker host is important to know for the current operations and for capacity planning. Dynamic cluster managers like Docker Swarm use the total memory available on the host and the requested memory for containers to decide on which host a new container should ideally be launched. Deployments might fail if a cluster manager is unable to find a host with sufficient resources for the container. That’s why it is important to know the host memory usage and the memory limits of containers. Adjusting the capacity of new cluster nodes according to the footprint of Docker applications could help optimize resource usage.

Docker images and containers consume additional disk space. For example, an application image might include a Linux operating system and might have a size of 150-700 MB depending on the size of the base image and installed tools in the container. Persistent Docker volumes consume disk space on the host as well. In our experience watching the disk space and using cleanup tools are essential for continuous operations of Docker hosts.

Because disk space is very critical it makes sense to define alerts for disk space utilization to serve as early warnings and provide enough time to clean up disks or add additional volumes. For example, Sematext Monitoring automatically sets alert rules for disk space usage for you, so you don’t have to remember to do it.

This metric can have different “patterns” depending on the use case. For example, batch jobs running in containers vs. long-running services commonly result in different container count patterns.  A batch job typically starts a container on demand or starts it periodically, and the container with that job terminates after a relatively short time.  In such a scenario one might see a big variation in the number of containers running resulting in a “spiky” container count metric. On the other hand, long-running services such as web servers or databases typically run until they get re-deployed during software updates. Although scaling mechanisms might increase or decrease the number of containers depending on load, traffic, and other factors, the container count metric will typically be relatively steady because in such cases containers are often added and removed more gradually. Because of that, there is no general pattern we could use for a default Docker alert rule on the number of running containers.

Nevertheless, alerts based on anomaly detection, which detect sudden changes in the number of the containers in total (or for specific hosts) in a short time window, can be very handy for most of the use cases. The simple threshold-based alerts make sense only when the maximum or the minimum number of running containers is known, and in dynamic environments that scale up and down based on external factors, this is often not the case.

Docker container metrics are basically the same metrics available for every Linux process but include limits set via cgroups by Docker, such as limits for CPU or memory usage. Please note that sophisticated monitoring solutions like Sematext Monitoring are able to aggregate container metrics on different levels like Docker Hosts/Cluster Nodes, Image Name or ID and Container Name or ID.  Having the ability to do that makes it easy to track resources usage by hosts, application types (image names) or specific containers. In the following examples, we might use aggregations on various levels.

One of the most basic bits of information is information about how much CPU is being consumed by all containers, images, or by specific containers. A great advantage of using Docker is the capability to limit CPU utilization by containers.  Of course, you can’t tune and optimize something if you don’t measure it, so monitoring such limits is essential.  Observing the total time a container’s CPU usage was throttled provides the information one needs to adjust the setting for CPU shares in Docker. Please note that CPU time is throttled only when the host CPU usage is maxed out.  As long as the host has spare CPU cycles available for Docker it will not throttle containers’ CPU usage. Therefore, the throttled CPU is typically zero and a spike of this metric is typically a good indication of one or more containers needing more CPU power than the host can provide.

It is a good practice to set memory limits for containers.  Doing that helps avoid a memory-hungry container taking all available memory and starving all other containers on the same server. Runtime constraints on resources can be defined in the Docker run command.  For example, “-m 300M” sets the memory limit for the container to 300 MB. Docker exposes a metric called container memory fail counters.  This counter is increased each time memory allocation fails — that is, each time the pre-set memory limit is hit.  Thus, spikes in this metric indicate one or more containers needing more memory than was allocated.  If the process in the container terminates because of this error, we might also see out of memory events from Docker.

Like the memory of any other process, a container’s memory could be swapped to disk. For applications like Elasticsearch or Solr one often finds instructions to deactivate swap on the Linux host – but if you run such applications on Docker it might be sufficient just to set  “–memory-swappiness=0” in the Docker run command!

In Docker, multiple applications use the same resources concurrently.  Thus, watching the disk I/O helps one define limits for specific applications and give higher throughput to critical applications like data stores or web servers, while throttling disk I/O for batch operations. For example, the command docker run -it –device-write-bps /dev/sda:1mb mybatchjob would limit the container disk writes to a maximum of 1 MB/s.

Networking for containers can be very challenging.  By default, all containers share a network, or containers might be linked together to share a separated network on the same host. However, when it comes to networking between containers running on different hosts an overlay network is required, or containers could share the host network. Having many options for network configurations means there are many possible causes of network errors.

Moreover, not only errors or dropped packets are important to watch out for.  Today, most of the applications are deeply dependent on network communication. The throughput of virtual networks could be a bottleneck especially for containers like load balancers. In addition, the network traffic might be a good indicator how much applications are used by clients and sometimes you might see high spikes, which could indicate denial of service attacks, load tests, or failures in client apps.

So watch the container network traffic – it is a useful metric in many cases and complements IT network monitoring.

There you have it — the top Docker metrics to watch. Staying focused on these top metrics and corresponding analysis will help you stay on the road while driving towards successful Docker deployments on many platforms such as Docker Enterprise, Kubernetes, AWS EKS, Google GKS or any other platform supporting Docker containers.

If you’d like to learn even more about Docker Logging and Monitoring continue to read about Sematext Monitoring, our comprehensive and easy-to-use monitoring solution for containers. Or if you want to use Docker with Kubernetes read our guides to Kubernetes Logging and Kubernetes Monitoring to help you get started with the orchestrator.