Thanks for downloading Elasticsearch Developer Cheatsheet

You’ll receive an email with the download link in the next few minutes. Please check your inbox

Open Distro for Elasticsearch eBook: The Complete Review by Sematext 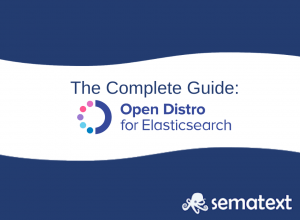 See Amazon’s first public version of Open Distro for Elasticsearch in action. In this guide you’ll learn about:

Author: Rafal Kuć
Software Engineer • Sematext
Software engineer, trainer, consultant and author from time to time – some would say that he is an all in one battle weapon concentrated mostly on Lucene, Solr and Elasticsearch. However he also likes all the other cool stuff that is happening in the IT world. Likes to share his knowledge by giving talks at various meetups and conferences.
Follow Rafal on: Twitter • LinkedIn • Dev.to