The official Elasticsearch Image on Docker Hub has already generated more than 1.6 million pulls. It is probably the easiest way to get a development setup — which includes Elasticsearch — to the application stack. The reason for this crazy number? A rapidly growing number of organizations are using Elasticsearch and Docker in production. Needless to say, monitoring Elasticsearch is essential in production, and you can find a detailed analysis of this topic (including the “top 10 Elasticsearch metrics to watch”) in the free eBook: ElasticsearchMonitoring Essentials. Docker is disruptive in many ways, and there are many things that are slightly different and worth mentioning.  These include:

Next, I’m going to demonstrate a setup to monitor multiple Elasticsearch nodes on a single Docker Host. The final setup will provide the full Monitoring and Logging package:

So let’s first decide on one of the following options to monitor Elasticsearch on Docker.  You can:

I chose to implement Option #3 in this blog post because it provides the best insights into Elasticsearch. This means the Elasticsearch container needs file-system access to the SPM monitoring agent. Sematext provides the SPM Client (which includes the monitoring agent and metrics sender) pre-installed in a Docker Image, referred as “SPM Client Image/Container” in the following instructions and published on Docker Hub as “sematext/spm-client”.  The main trick here is to mount a volume from SPM-Client Container into Elasticsearch Containers in order to load the monitoring library.

Let’s have a look at the desired setup and how to get there: 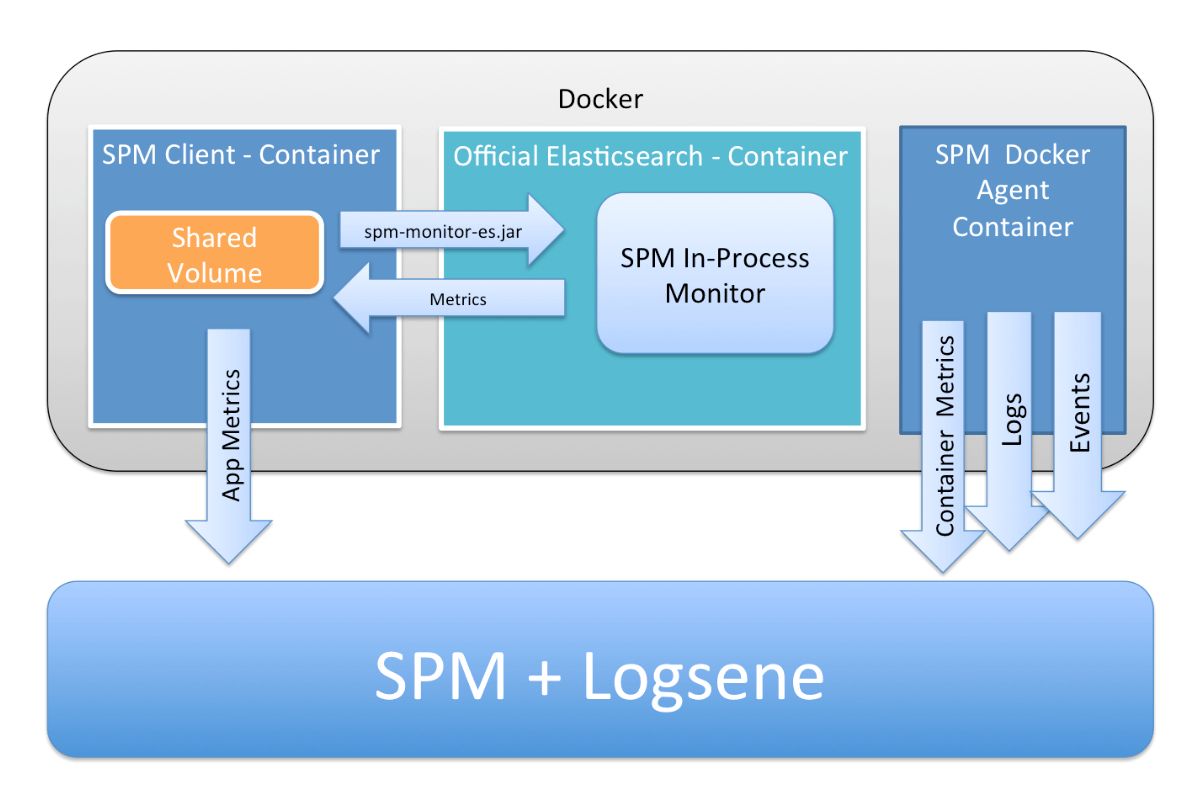 Monitoring Setup for Elasticsearch on Docker

Here is the SPM Client Image – the important thing to know about this image is that it provides a VOLUME (/opt/spm), which can be mounted from the Elasticsearch Container. Download SPM-Client Image:

The SPM Token is a unique identifier for monitored applications – if you haven’t yet created an SPM App for Elasticsearch, then create one here.

Save the SPM Token in an Environment Variable

Choose name for the Elasticsearch nodes

Start SPM-Client with the defined configurations

We are ready to fire up multiple Elasticsearch nodes (in our example the nodes ES_1 and ES_2). In the command we see options for the SPM In-Process monitor to inject a .jar file from SPM Client Volume — the ES_JAVA_OPTS string is taken from SPM install instructions — using the SPM Token and naming the JVM (because we like to run N instances on the same host)

Almost done! After a minute or so metrics for the Docker Host,  JVMs and Elasticsearch nodes will arrive to our SPM App.

Please note, because we chose a consistent naming for Elasticsearch Nodes (-Des.node.name), Container Hostname (-h) and JVM Name (-javaagent:/opt/spm/spm-monitor/lib/spm-monitor-es.jar=${SPM_TOKEN}::${ES1}) we can  immediately see in every chart the relevant filters named “ES_1/ES_2” – much better than some random Container IDs or automatically generated Elasticsearch Node-Names! 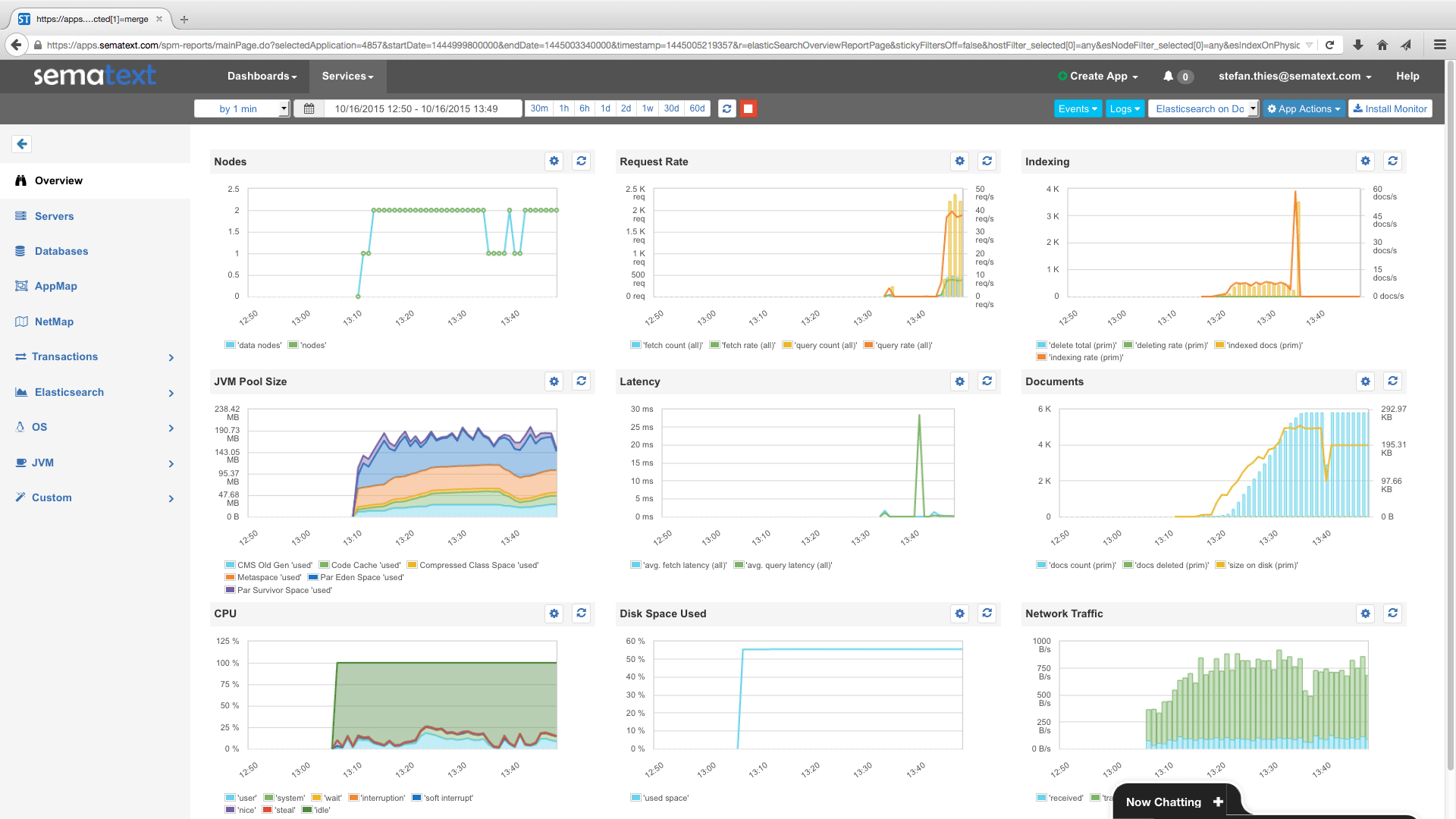 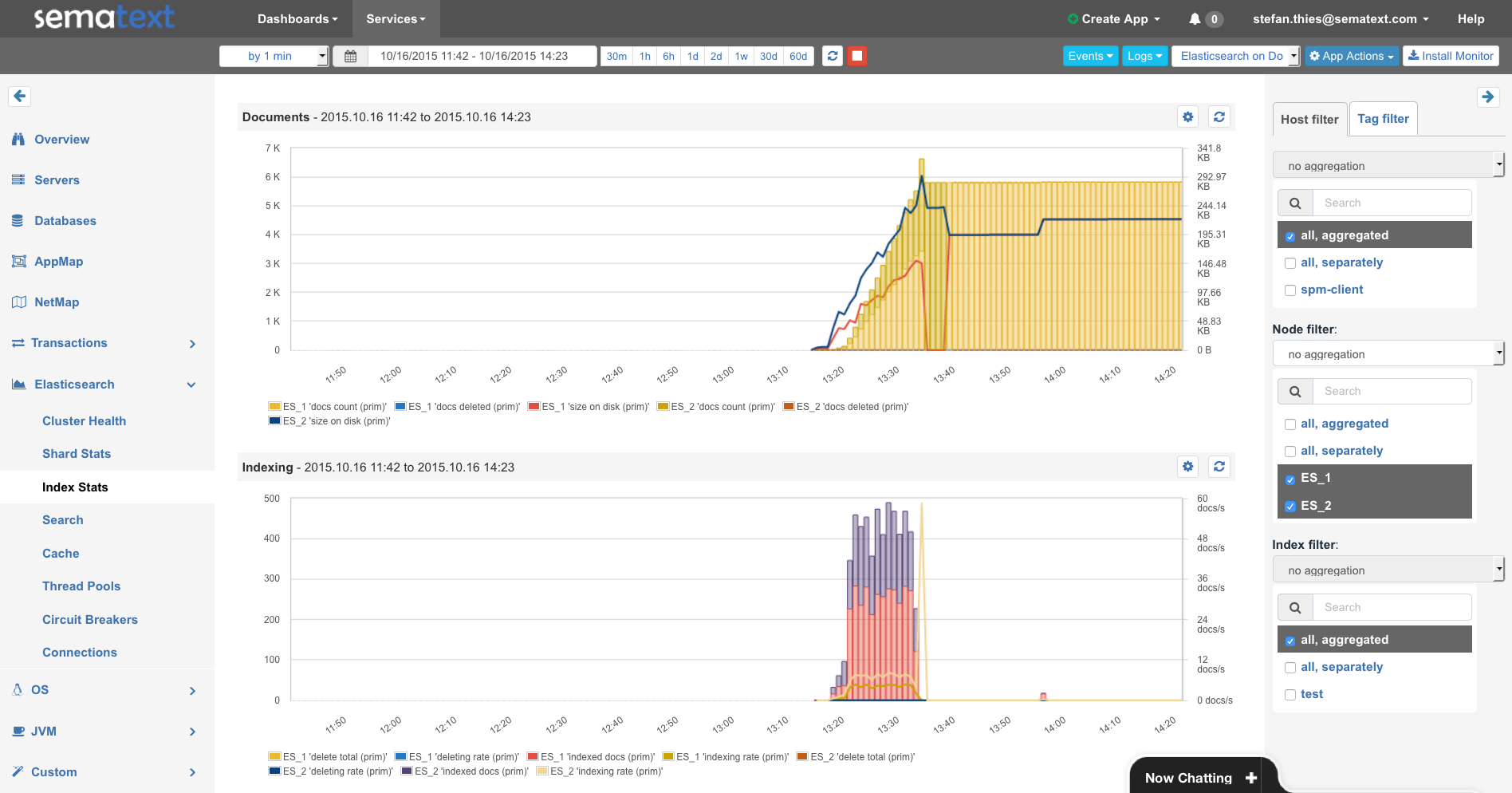 Index Stats for the Elasticsearch Nodes ES1 and ES2

But what about my Elasticsearch Logs and the Container Metrics?

Simply run SPM for Docker – it collects logs (and it can parse Elasticsearch logs) and stores them in Logsene (not used Logsene before?  See Logsene 1-Click ELK Stack). First we create the SPM App with the type “Docker” and we create a Logsene App to receive the logs. Then we use the generated App Tokens to run SPM for Docker

After a few minutes, you’ll see Host and Container Metrics together with Events and Logs in SPM. 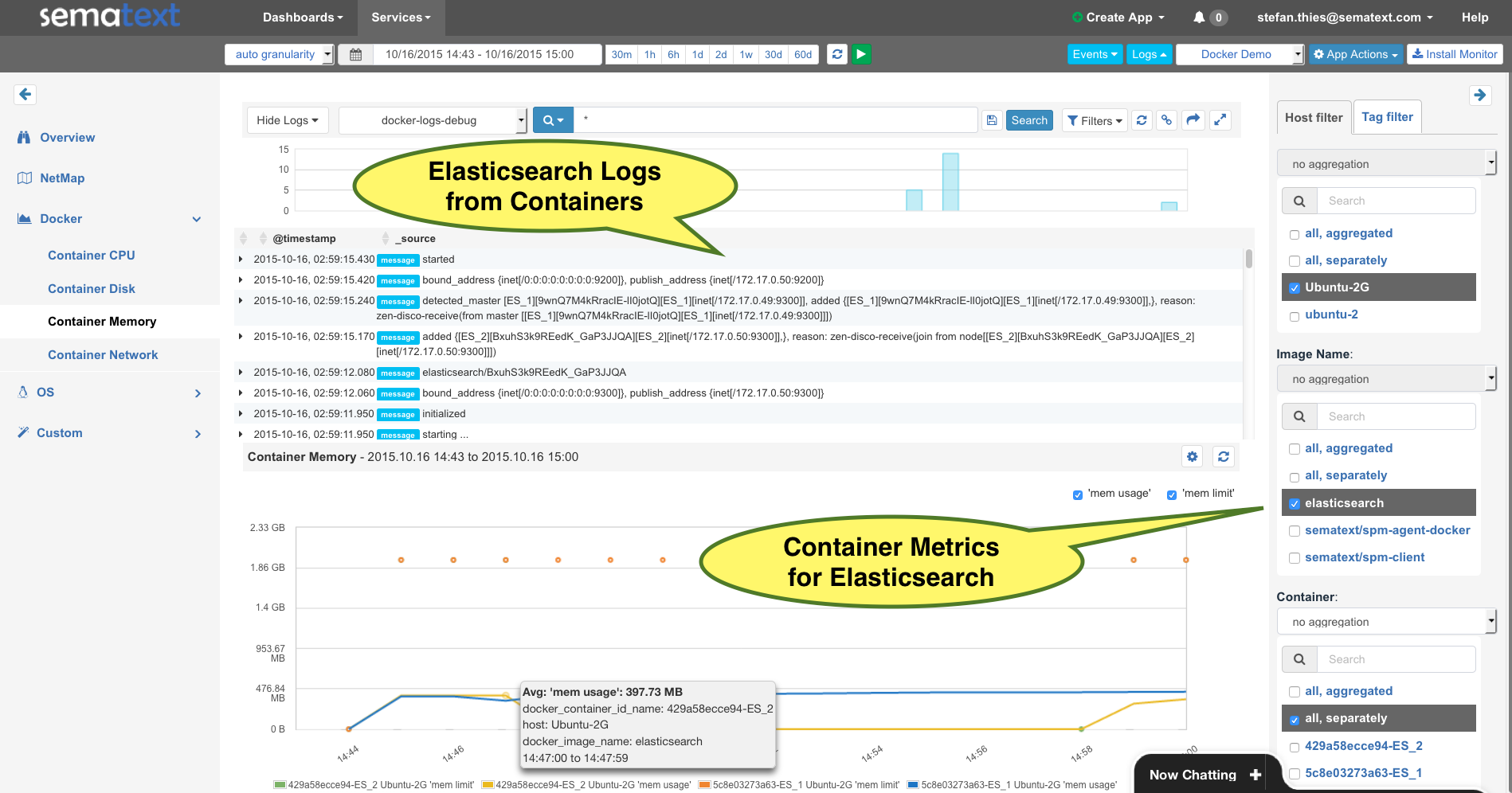 Container Logs and Metrics from Elasticsearch

Please note that logs from the containers are automatically shipped and parsed!
“Wait, there’s no setup for log shippers?” you might be saying.
That’s correct – there is NO complicated setup of syslog, Logstash, Docker log drivers, etc.  It all gets done by SPM for Docker

For example, each log line has a “node_name” field for the Elasticsearch node. It takes the timestamps, severity and source from the Elasticsearch log and each log is automatically tagged with the container_id and image name. Moving from SPM Metrics to detailed Elasticsearch Logs – including Exceptions and parsed Stack Traces – is just another mouse click!

The filters by the field stats on the right side of the screen make it easy to identify containers with the most logs, by choosing “container_name”.  That’s just a little detail in the Logsene UI, feel free to explore it and create Alerts or use Kibana4 Dashboards for your container logs.

If you’d like to know more about the meaning of all those Elasticsearch metrics check Top 10 Elasticsearch Metrics or the free eBook mentioned above. I believe Docker is a great platform to experiment with multiple nodes, even before you go to production.

Like what you’ve seen here? It’s super easy to get started right now with Docker and Elasticsearch monitoring (and logs!): just sign up for a free 30-day trial (no credit card required) of SPM and Logsene. Interested in monitoring other Apps on Docker with SPM?  Then please contact us by email or hit us on Twitter with questions and feedback.