The Solr Redis Plugin is an extension for Solr that provides a query parser that uses data stored in Redis. It is open-sourced on Github by Sematext. This tool is basically a QParserPlugin that establishes a connection to Redis and takes data stored in SET, ZRANGE and other Redis data structures in order to build a query. Data fetched from Redis is used in RedisQParser and is responsible for building a query. Moreover, this plugin provides a highlighter extension which can be used to highlight parts of aliased Solr Redis queries (this will be described in a future).

Imagine you have a social network and you want to implement a search solution that can search things like: events, interests, photos, and all your friends’ events, interests, and photos. A naive, Solr-only-based implementation would search over all documents and filter by a “friends” field. This requires denormalization and indexing the full list of friends into each document that belongs to a user. Building a query like this is just searching over documents and adding something like a “friends:1234” clause to the query. It seems simple to implement, but the reality is that this is a terrible solution when you need to update a list of friends because it requires a modification of each document. So when the number of documents (e.g., photos, events, interests, friends and their items) connected with a user grows, the number of potential updates rises dramatically and each modification of connections between users becomes a nightmare. Imagine a person with 10 photos and 100 friends (all of which have their photos, events, interests, etc.).  When this person gets the 101th friend, the naive system with flattened data would have to update a lot of documents/rows.  As we all know, in a social network connections between people are constantly being created and removed, so such a naive Solr-only system could not really scale.

Social networks also have one very important attribute: the number of connections of a single user is typically not expressed in millions. That number is typically relatively small — tens, hundreds, sometimes thousands. This begs the question: why not carry information about user connections in each query sent to a search engine? That way, instead of sending queries with clause “friends:1234,” we can simply send queries with multiple user IDs connected by an “OR” operator. When a query has all the information needed to search entities that belong to a user’s friends, there is no need to store a list of friends in each user’s document. Storing user connections in each query leads to sending of rather large queries to a search engine; each of them containing multiple terms containing user ID (e.g., id:5 OR id:10 OR id:100 OR …) connected by a disjunction operator. When the number of terms grows the query requests become very big. And that’s a problem, because preparing it and sending it to a search engine over the network becomes awkward and slow.

How Does It Work?

The image below presents how Solr Redis Plugin works.

As we can see, Solr Redis Plugin eliminates a lot of work that client application doesn’t have to be aware of:

The project is available on Github. You can clone the repository at https://github.com/sematext/solr-redis.git. Patches are welcome. There is also a package in the central maven repository com.sematext:solr-redis.

How to use the Plugin?

Solr Redis Plugin is simply a QParserPlugin that is very easy to deploy in a Solr instance. The plugin classes are packaged into a JAR file. You can also download a pre-built package from Maven (that JAR file has to be moved to Solr classpath, of course). For example, you can simply copy the solr-redis.jar file to $SOLR_HOME/lib directory.  To use it, add the following snippet to solrconfig.xml and restart Solr:

Solr Redis is a QParserPlugin, so the syntax is similar to other QParserPlugins such as frange, term or boost. To use the plugin in a query you need to run a query such as:

The constructions presented above can be used in both q and fq Solr parameters. The example of the whole request with filter query is presented below.

KEY – is a Redis key used to look up values.

FIELD – is a name of a field which will be queried. Field has to exist in index schema. You can use any of field types: text fields, string fields or numeric fields.

In most cases you can use Solr Redis Plugin in both q and fq. Often, it is better to use a plugin as a filter query. Using the plugin as a filter lets Solr cache the filter using FilterCache, which will speed up all user searches.

Let’s go back to the Social Network example for a moment. User X may want to search not only documents related to his friends, but also documents related to friends of friends. Perhaps documents from a group of friends should be scored more highly than documents from other friends. To do this we can use scoring from Redis sorted set. Each record in the sorted set can have a different scoring value. The query to Solr that uses sorted set scoring is shown below. Please note that in this example the Solr Redis Plugin is used in q. That’s because Solr doesn’t calculate scoring of filter query. Here we cannot use fq because we need Solr to do the scoring using scores from sorted set.

The Solr Redis Plugin logs a few messages which are helpful to understand when Redis is queried, what data is fetched from Redis, which Redis command was used, or when an error occurred. You can easily manage logging level using Solr Admin UI. 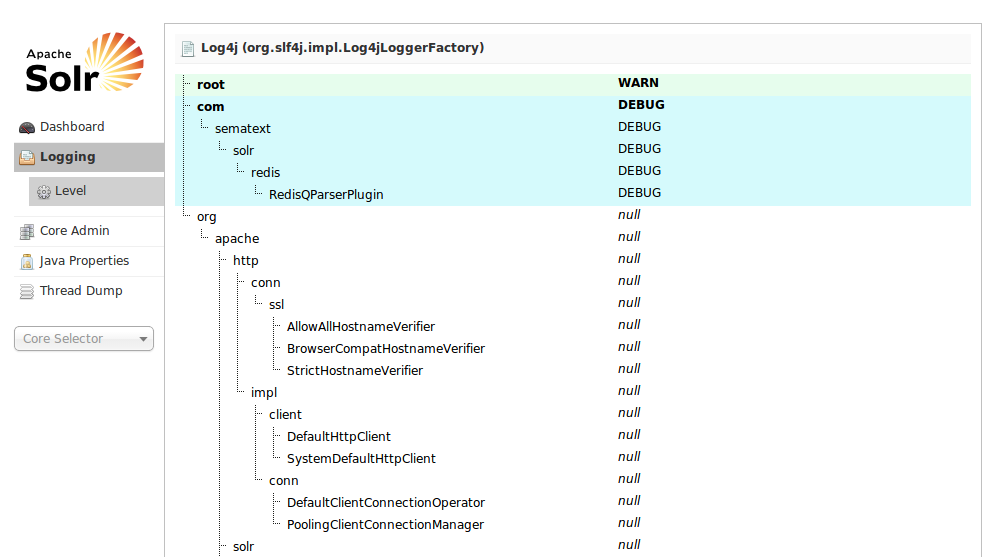 At Sematext we care a lot about performance; in fact, we built SPM, a comprehensive performance monitoring, alerting and anomaly detection solution.   Not only does it monitor Solr (here’s a demo of Solr being monitored), but many other types of applications as well.  We also frequently tune Solr performance for our clients in our Solr Consulting engagements.  So, of course, we ran a performance test of Solr Redis Plugin!

In the first test, 1,000,000 simple documents were indexed in Solr. Each document represents a user with an ID from 1 to 1,000,000. The second thing was to generate connections between users, done randomly with a simple python script. Each user had between 1 and 1,000 connections (avg. was 500). Once we prepared the data it was time to run performance tests. Tests were performed to compare results of Solr Redis Plugin to an approach with simple filter query with multiple “OR” clauses. We generated a query set. All tests were performed with Apache JMeter using 5 threads.  JMeter was run from the same machine where Solr was deployed. It is not ideal test environment because it won’t show the biggest advantage of the plugin — sending very big queries over the network, but we also wanted to show that even on the same machine using the Solr Redis Plugin is more efficient than using big filter queries.

Results in the table and images below present performance tests for both the Solr Redis Plugin and a filter query with multiple terms. The average number of connections between users was 500. We can see that using Solr Redis Plugin is a bit faster than sending big queries to Solr. It is very important that queries are already prepared so measured latency doesn’t include the time needed to generate a query. In a real-world scenario queries should also be generated by application which also take time (getting data from Redis and constructing a query string before sending it to Solr).

Below we can see results of the test which was very similar to the previous one except the average number of connections between users was 5,000.

You have to remember that HTTP URL size is limited, and unless you change the setting in the container or you use POST requests instead of GET you would be unable to run queries with hundreds or thousands clauses in a filter.

This post describes the Solr Redis Plugin. We showed an example of usage of the plugin for handling queries in a social network. Using such a plugin is much more convenient, efficient and scalable than generating filter queries with hundreds or thousands of terms. Performance tests show that it is more efficient to use the plugin instead of sending large queries to Solr over the network. We should not forget tests were performed in an environment where JMeter was sending queries from the same machine where Solr was running. This means our tests involved almost no network traffic, which means the results for a pure Solr approach without Solr Redis Plugin would be even worse than queries been going over the network to a remote Solr instance.